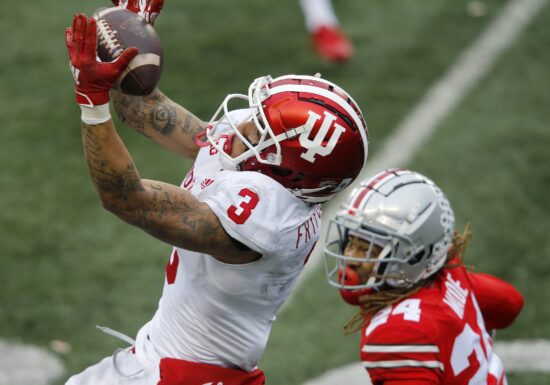 The Outback Bowl looks like the good old fashioned matchup of offense vs. defense when the Mississippi Rebels take on the Indiana Hoosiers in Tampa Florida. Ole Miss posted a 4-5 record in the SEC, but more impressive is their #3 offense in the entire country. That unit will have a challenge on Saturday against an Indiana defense that leads the nation in INTs with 17.

Ole Miss Ready to Put on a Show?

The Rebels pass offense gets a lot of credit, which they should in ranking 6th in the nation with 344.6 yards/game. It was the Ole Miss rushing attack that was equally as credible however, as their 217.7 ypg was tops in the SEC.

RB Jerrion Ealy had 9 rushing TDs in 9 games in 2020 to go along with 745 yards on the ground and a 5.1 yards/carry average. The Hoosiers have a great secondary, but they are also pretty stingy against the run, ranking 32nd in the country allowing 135 yards/game. The Hoosiers did allow 140 yards on 35 carries to Wisconsin in their last game however.

Getting a strong ground game going is imperative for Lane Kiffin’s squad, as QB Matt Corral and the passing attack is suddenly struggling. Corral had thrown 12 TD to 0 INT in his last three games prior to throwing five INTs last time out against LSU. That game might not be an anomaly either, as the high turnover rate coincided with WR Elijah Moore and TE Kenny Yeboah opting out to prepare for the NFL draft.

Will Defense Win This One for Indiana?

The Hoosiers defense is licking their chops getting ready to face a QB that tossed five interceptions in his last game. Indiana had a nation best 17 picks this season, including three against Ohio State’s Justin Fields who had just five all season.

Indiana’s defense may have to do the heavy lifting, because their offense took a big hit in losing QB Michael Penix, Jr. to a knee injury in week 13. The Hoosiers went on to beat the Terrapins 27-11, and did hold off Wisconsin 14-6 to close out the year, but Penix, Jr. was a possible Heisman candidate at one point as he had 3+ TD passes in 3 of 5 games before getting hurt.

Jack Tuttle was just 13/22 vs. the Badgers for 130 yards, but did have 2 TD to 0 INT. He’s also up against an Ole Miss defense that gave up 430+ yards passing to LSU last game. For as good as their offense was, the Rebels had the worst defense in the SEC allowing 535 yards/game.

Indiana is a -8.5 favorite for this game, and oddsmakers are expecting some points with a 66 betting total. Kiffin has had two weeks to find receivers to step up in place of Moore and Yeboah, while Indiana may come out flat after being off since December 5th.