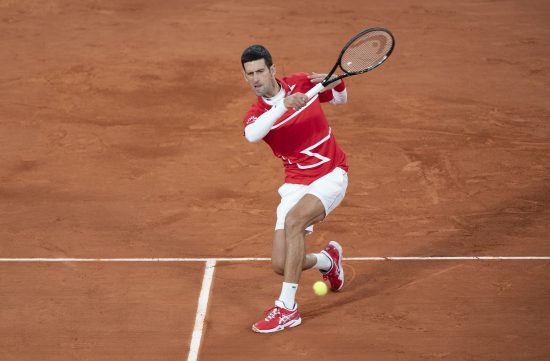 Organizing a tennis tournament in the midst of COVID-19 pandemic, hitting the lineswoman at the US Open, getting destroyed by Rafa Nadal in the final of the French Open – it’s obviously been a very hard year for Novak Djokovic.

Still, he is going to end 2020 at the very summit of the ATP Rankings, which is going to be his sixth year-end No. 1 ranking. A cherry on the top would be to win the last tournament he’s going to play in 2020 – the Nitto ATP Finals in London.

The first obstacle on that road comes in the form of Diego Schwartzman. The two are competing in the “Group Tokyo 1970” together with Daniil Medvedev and Alexander Zverev.

No matter what happens at the ATP Finals, Novak Djokovic will finish the year as the No. 1 player in the ATP.

Oddsmakers, however, think he’s going to win another tournament before the end of the year, judging by the fact that they’ve given him the role of the favorite in London:

Winning the last ATP Finals to take place at The O2 would be a nice entry in his portfolio. Plus, winning the tournament would get him back in a good mood, after some pretty disappointing performances in October.

A Very Interesting Year for the ATP #1

The year started very well for Djokovic, with him winning the ATP Cup, defeating Daniil Medvedev in the semifinal and Rafael Nadal in the final.

He then went on to win his 8th Australian Open title, giving away only three sets in total in the entire tournament. In the final of the AO2020, he defeated Dominic Thiem, another player who’ll take part in the ATP Finals.

From Australia, Djokovic went to the Emirates, where he won the ATP Dubai. But, then, the COVID-19 outbreak happened. The entire world went into a lockdown for a couple of months.

In June, his home country of Serbia came out of the lockdown, with the officials allowing Novak to organize a charity tournament. Unfortunately, the Adria Tour, as it was named, proved to be an epidemiological disaster, with fans and players getting infected with the coronavirus.

Over the following few weeks, Djokovic was getting a lot of bad press for this, but his brilliant performances at the ATP Cincinnati made everyone forget about the COVID-19 blunder.

Then, in September, it was time to play the US Open. With Rafael Nadal and Roger Federer out, Djokovic had, by far, the best odds of winning. But, he didn’t. Instead, he got disqualified from the tournament after hitting a lineswoman in the throat with the ball.

He had a chance to pull himself back together at the 2020 French Open, where he came after winning the ATP Rome, another tournament played on clay.

Unfortunately for Djokovic, if there’s a player who likes playing on this surface, it’s Rafael Nadal. The two met in the final of Roland Garros, where the Spanish superstar won by 3-0 (6-0, 6-2, 7-5).

Djokovic Coming Off an Unexpected Loss in Vienna

Since the French Open Final, Djokovic has played three more matches, struggling in each one of those. He beat his fellow Serbian Filip Krajinovic in the first match of the ATP Vienna, followed by a win over Croatian Borna Coric.

Both of those matches saw a tie-breaker in the first set, proving that Novak’s wins weren’t as easy as predicted.

All signs were there that Djokovic wasn’t playing at his best, although not many believed a +1,400 underdog Lorenzo Sonego would beat him. But, he did.

The surprising defeat happened for a reason, which had nothing to do with the on-court stuff. According to Djokovic, he wasn’t in a good mood that day, following the news that the leader of the Serbian Orthodox Church in Montenegro, whom Djokovic was an admirer of, passed away that day.

This is a very sad day. I was privileged enough and honored to have met him, to spend some time with him and to feel the beautiful energy he possessed.

In the same interview, Djokovic also talked about securing his sixth end-year No. 1 spot in the ATP Rankings, thus equalizing the record of his childhood hero Pete Sampras.

Speaking of records, if he wins in London, the Serb will tie Roger Federer’s record of six ATP Finals wins.

Can Underdog Upset the Odds in the Djokovic vs Schwartzman Match?

Even though the spotlight is on Djokovic, Diego Schwartzman will also have his say at the ATP Finals.

Although he’s had a pretty good year, reaching the No. 9 in the ATP, Diego Schwartzman needs to feel sorry for himself for being drawn into the Group Tokyo 1970, named after the first ATP Finals tournament in history.

Besides him and Djokovic, two Top 10 players will also compete in this group, namely Daniil Medvedev and Alexander Zverev.

As Schwartzman is still without a win over Djokovic in his entire career, he probably feels that he has a better chance against the other two.

Still, this doesn’t mean that he’ll come to The O2 waving a white flag against Djokovic. On the contrary, you can expect Schwartzman to give his utmost.

The trouble is that he’s best probably isn’t going to be enough for the ATP #1. Instead, the Serbian player should be able to win the Djokovic vs Schwartzman match, without losing a single set.