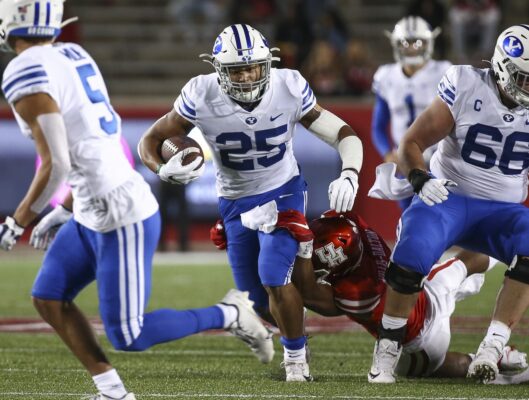 Even though the 2020 Boca Raton Bowl wasn’t the bowl the #14 BYU Cougars (10-1) dreamed of when they went 9-0 in the regular season of college football, winning against the UCF Knights (6-3) would be a nice way to end the year.

The Cougars are coming to Florida as a favorite to win the Boca Raton Bowl. At least, that’s according to oddsmakers who think the Cougars are going to get their 11th win of the season. That’s something the football program of Brigham Young University hasn’t achieved since 2009.

The 7th edition of the Boca Raton Bowl will see the ACC representative the UCF Knights taking on the Brigham Young Cougars, who compete as an independent team. The two have met only two times in history, both of which happened in the last decade.

The first-ever BYU vs UCF game saw the team from Utah winning by 24-7. The game in question was played in September 2011. Fast-forward three years and the Knights got their revenge. After 24-24 in the regulation time, UCF got themselves a win with a TD (+ extra point).

The third BYU vs UCF game takes place on Tuesday evening in Florida, where COVID-19 regulations are such that only 20% seating capacity is allowed. It’s needless to say that a majority of fans will support the UCF Knights. After all, their university is situated in Florida, unlike Brigham Young University which is almost 2,500 miles away from Boca Raton’s FAU Stadium.

Their goal ahead of the start of the 2020 NCAA football season was to get an invitation to one of New Year’s Six bowls. After entering a superb series of 9 straight wins, they were certain they’re going to book a ticket to one of those games.

However, then a loss to Coastal Carolina happened. Despite getting into that game as a 10-point favorite, BYU ended up losing 22-17. Proof that the loss was just a glitch in the otherwise impressive run is that they bounced back straight away. In the next game, we saw them beating San Diego State by 28-14.

The game in question was their 10th win of the season, which means that they have a chance to finish the year with 11 wins. The Cougars haven’t achieved such a feat in more than a decade.

Furthermore, winning the 2020 Boca Raton Bowl would also mean they’d end the season with only one defeat. That’s something that only six teams in BYU’s history have achieved, the last being the 1995 BYU team.

The fact is that the UCF Knights are not as good a team as the BYU Knights. However, they do have one advantage – the 2020 Boca Raton Bowl is played in Florida. That said, it’s likely that a majority of about 6,000 people in the stands of FAU Stadium will be supporting UCF.

Furthermore, the Cougars have a bad experience with games played in Florida. Their all-time score in the Sunshine State is 0-8, but the last time they played here was more than a year ago. They now have a fantastic chance to end the bad run, something they seem destined to do.