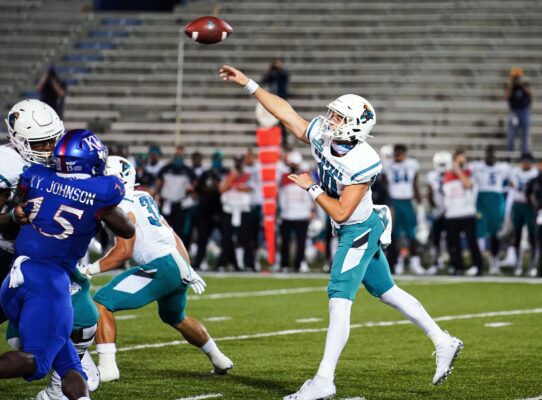 November 23, 2019 – that’s the day when Coastal Carolina lost their last game. Since then, the Chanticleers have been in a fantastic series, winning 12 straight games. Eleven of those games were played in the regular season of the 2020 NCAAF. Coastal Carolina has a chance to finish the year without a single defeat. To do that, they need to beat the Liberty Flames in the 2020 Cure Bowl.

If you take a look at the odds, you will see that Coastal Carolina is expected to win this game. However, a thing about Liberty Flames is that they seem to love playing against big favorites. This season, we saw them winning games against Virginia Tech and Western Kentucky, in which the Flames were huge underdogs. Can they slay another giant before the end of the year?

The Coastal Carolina vs Liberty Flames clash was supposed to happen on December 5. However, COVID-19 caused that game to get canceled. Three weeks later, the two will finally meet.

This time, it’s not a regular-season game, but one of the college football bowls. It’s not one of the New Year’s Six bowls, which has probably made Coastal Carolina disappointed. After all, this team finished the regular season without a single defeat.

That’s something only four other teams have achieved this season, namely the following:

Still, that wasn’t enough for the Sun Belt Conference Champions to get an invite to one of the New Year’s Six. On the bright side, on the second day of Christmas, they are taking on a very interesting opponent.

Similarly to Coastal Carolina, Liberty Flames are also coming to Florida following a very impressive season. This team is entering the 2020 Cure Bowl with a 9-1 record.

No Playoff for Coastal Carolina Despite 11-0 Record

The 2020 NCAAF season was strange, to say the least. The pandemic caused many games to end up postponed/canceled, but the Chanticleers still managed to play 11 games. That includes the game against BYU, which was organized on very short notice, following the cancelation of the Coastal Carolina vs Liberty Flames in early December.

Despite not having a lot of time to prepare for the game with the (until then) unbeaten BYU, Coastal Carolina got themselves a win. In one of the most dramatic games of the entire season, the Chanticleers won, thus keeping their winning percentage at 100%.

Unfortunately for Coastal Carolina, their 11-0 record wasn’t enough for the College Football Playoff. Actually, it wasn’t even enough for an invite to the New Year’s Six bowls. That said, they can look at the 2020 Cure Bowl as a consolation prize.

It wouldn’t be much of an exaggeration to say that Coastal Carolina has never had such a good team. Still, despite the quality of their players, the Chanticleers probably wouldn’t have done much if it weren’t for their coach Jamey Chadwell.

Proof of Chadwell’s impact on the team is that he got shortlisted for the FWAA Eddie Robinson Coach of the Year award.

Over in Liberty, Hugh Freeze has been the central figure this season. The coach is regarded by many to be the #1 reason behind the Flames’ fantastic record in 2020.

Liberty Flames’ fantastic performances this season have put him on the radar of many programs, including those that belong to the Power Five.

Rumor has it that his next destination could be Tennessee. The Volunteers are reportedly considering firing Jeremy Pruitt. If that happens, it’s very likely they’re going to approach Freeze. What this practically means is that the 2020 Cure Bowl might be his last game as the head coach of Liberty Flames.

Both Coastal Carolina and Liberty Flames have been brilliant in 2020. They got fantastic players, as well as fantastic coaches. Both teams are also very motivated to do well in the Cure Bowl, which promises a very entertaining game on Saturday.

So, who’s going to win the 2020 Cure Bowl? Coastal Carolina seems more likely to win, but it’s going to be a very close game, no doubt about it.