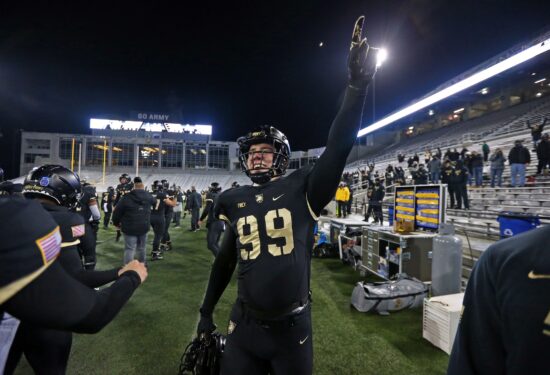 After their original spot in the Lending Tree Bowl was cancelled, the Army Black Knights desperately tried to fill any opening in a bowl game that had not yet been cancelled due to the pandemic. Ordinarily another team would have just quit and ended their season, but not surprisingly the Black Knights who went 9-2 on the season were too determined to let their year end like that.  Luckily West Virginia needed such an opponent in Army in the Liberty Bowl after their original opponent Tennessee dropped out, so now we have a battle of the unlikeliest of teams trying to end their seasons on a high note.

If you have managed to watch any Army game this season, you know they are about one thing and one thing only to move the ball: the run. The Black Knights leading passer Christian Anderson has only attempted 41 passes on the entire year and completed just 16 of them for 158 yards and one touchdown. This of course comes from these players not being typical Division-1 athletes who don’t have time to memorize a traditional playbook, this brings up the triple option-style offense with lots of runs.

As you can imagine, being one-dimensional still isn’t the best strategy in football no matter how many times you master it because it’s all you run. Army’s leading rusher Tyhier Tyler only has 502 yards on the season and two touchdowns as the offense is averaging less than 28 points a game. This is where Army’s defense comes in. They only have given up an average of 14 points on the year and have only given up over 28 points on the year twice in 11 games.

Up and Down Mountaineers Season

West Virginia finished the season 5-4 after they could not win any games back to back except to the worst two teams in the Big 12, Baylor and Kansas. And their last game they played they allowed 42 points to Iowa State for their worst loss of the season. So how is anyone to really trust them in any matchup?

Well for one, their starting quarterback, running back and wide receiver are all planning on playing in this game which means this game actually means something to them. Furthermore, their defense is definitely going to have an easier time defending an Army offense that is focused on just the run and this is a team that doesn’t have arguably the best rusher in the country in Iowa State’s Breece Hall.

Mountaineers are currently favored by 7 in this one, and I will take those points. Vegas is overvaluing the defense that the Black Knights have when in reality they have played no power five conference yet this year and when they played someone remotely in the same realm like Tulane, they gave up 38 points in a blowout loss. Like I said, West Virginia is coming off a blowout loss to Iowa State but sill their defense only averages giving up just 20 points a game themselves. Combine that with the fact that they can also throw better than anyone the Black Knights have faced, I would be shocked if the Mountaineers didn’t cover.