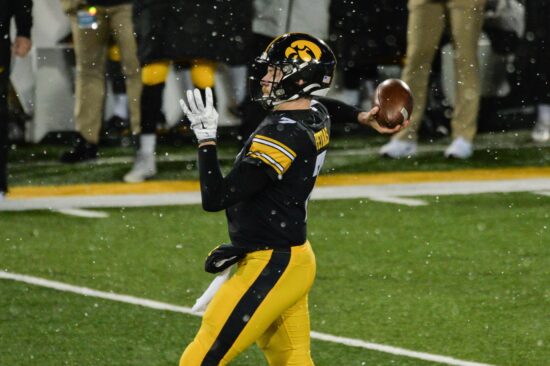 The 21st edition of the Music City Bowl in Nashville, Tennessee, is going to see an SEC team taking on a team from the Big Ten Conference. Those teams are Missouri Tigers and Iowa Hawkeyes, who met for the first time in almost exactly 10 years. Previous Missouri vs Iowa game took place on December 28, 2010. The Hawkeyes won that game, and are expected to do the same in the 2020 Music City Bowl as well.

The main reason why Iowa is favored to win the game in Nashville is that the Hawkeyes are on a six-win streak. After losing their first two games in the NCAAF season, they went on and won every single game, averaging a winning margin of 22 points in those games.

Mizzou finished the season with a defeat to Mississippi State, in which they were expected to do much better. In fact, the Tigers entered that game as favorite but ended up losing by 51-32. They also suffered a defeat a week before. Georgia destroyed them 49-14, but to be fair, the Bulldogs were favored to win it without any problems.

The Tigers are hoping to end their losing streak, for which, they need to outsmart another very tough team. Iowa is coming to Tennessee as a favorite, but the Hawkeyes might have some big problems on their hands – their head coach might have to stay home due to COVID-19.

Iowa’s most recent victory happened against Wisconsin on December 12. Iowa was supposed to play another game in the meantime, but their game against Michigan ended up canceled. The reason? COVID-19, what else…

Speaking of the virus that wreaked havoc on the regular season of college football, the coach of Iowa Kirk Ferentz contracted it a few days ago. He tested positive for COVID-19 on December 17, meaning that he will have to stay home until at least December 27. What this practically means is that the chance is the Hawkeyes will be without him in the 2020 Music City Bowl.

Missouri Tigers Playing In Front of Their Fans

One of the main reasons why the Tigers declined to take part in two other college football bowls (namely, Outback Bowl and Gator Bowl) is that the Music City Bowl is taking place close to home. According to their coach Eli Drinkwitz, playing the Nashville bowl means their friends and family can come.

Sure, the capacity of Nissan Stadium, the home of NFL’s Tennessee Titans, is going to be reduced. However, a majority of about 14,000 fans in the stands are going to be cheering for Missouri.

Even though odds suggest Iowa should win the 2020 Music City Bowl easily, this should be a very close game. We’ll probably see only a couple of points deciding the winner of the game.