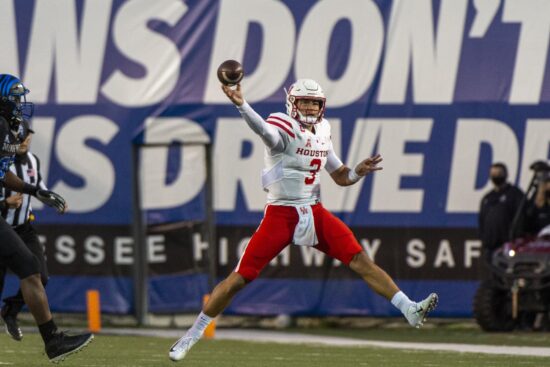 Even though it’s called New Mexico Bowl, this year, the game is heading to Texas. Due to the COVID-19 pandemic, the bowl organizers decided to move the Houston vs Hawaii game from Albuquerque’s Dreamstyle Stadium to Toyota Stadium in Frisco.

The Houston Cougars are thought of as a big favorite to win the 2020 New Mexico Bowl. They’re coming off a challenging NCAAF season, which saw eight of their games being either postponed or canceled entirely. As a result, the Hawaii Rainbow Warriors have had a better season than them. Still, the team from Texas seems to have much, much better players.

Cougars Get to Play a Bowl Game Despite a Losing Record

The Houston Cougars finished the regular season with a 3-4 record (3-3 in the AAC). Despite having more losses than wins this season, they got themselves invited to the 2020 New Mexico Bowl. That’s not something that happens too often in college football bowls, which usually feature teams that have done very well in the regular season.

However, they’re invited to the bowl for a reason – the Houston Cougars are a very good team. They are expected to win the game on Thursday, despite the fact that they’re taking on a team with a better record in 2020.

The reason behind Houston’s not-too-impressive display this year is the COVID-19 pandemic. Eight of their season games were rescheduled/canceled, meaning that the Cougars had to change their plans on many occasions. In turn, they didn’t have enough time to prepare for some games, which cost them valuable points.

This team finished the regular season second from the bottom in the AAC (West) table, with the winning percentage of 0.429. However, they look very determined to say farewell to 2020 with a win. At least, that’s according to their coach Dana Holgorsen.

I challenge (our players) to win this game so we can buy some rings that say ‘COVID CHAMPS’ on them, something to remember 2020 by,” said Holgorsen.

For Holgorsen, this is his second year in Houston, and despite his team not having too much success, they did do better than last year. In his first season at the helm of the Cougars, they finished with 4-8 overall.

The Hawaii Rainbow Warriors are officially without a home stadium. At least, for the time being. Last Thursday, the Aloha Stadium Authority announced the University of Hawaii football team will not be using the facilities any more. From 2021, Aloha stadium is not going to be their home venue. Which stadium they’re going to use still remains the question.

The stadium issue is not the only thing on their mind. The team is currently in the process of rebuilding, with many new recruits on their way to Hawaii. In fact, the program has already made seven new signings for tthe 2021 season.

Furthermore, two of Hawaii players have entered the NCAA Transfer Portal, namely sophomore Lincoln Victor (wide receiver) and junior Paul Scott (linebacker). Neither of them will feature in the Houston vs Hawaii game.

Not only are the Houston Cougars a better team, but they’re also more motivated to win the 2020 New Mexico Bowl than their opponent. They should be able to get an easy win on Christmas Eve, probably covering the spread without any problems.