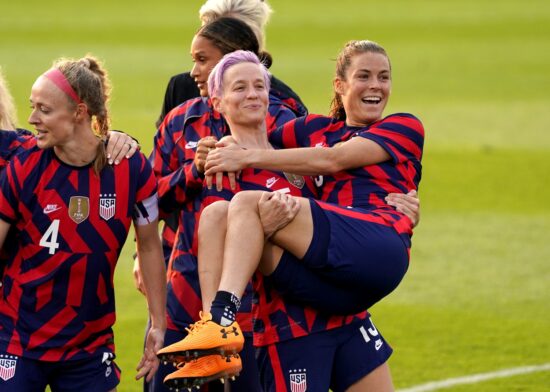 The American ladies had quite a day at the Olympics in Tokyo today. The soccer team rebounded following a loss in the opening round with a massive win, while the water polo unit posted, at the time, the biggest win ever in the Olympics.

New Zealand Experiences the US Rage

After losing 3-0 in the opening match of the Olympics against Sweden, the US team woke up to smash their next rivals, New Zealand. It was obvious even before the game started that the American team will give 100% to cover up the failure from a few days ago. But just a few believed in such high victory.

Of six goals scored for the USWNT, two were own goals of New Zealand’s players. Rose Lavelle opened the show in the 9th minute, but after her hit, things were quiet until the end of the first half, when Lindsey Horan doubled the lead in the final moments of that part of the game.

Abby Erceg was the first Kiwi player to hit the back of her own net in the 63rd minute. Her teammate Betsy Hassett cut down the lead to 1-3 some 18 minutes before the end, but that just woke up the Americans, who added three more goals in the remaining part of the event.

Christen Press and Alex Morgan were on target in the span of eight minutes, and CJ Bott closed the show with another own goal.

Tuesday morning will see the US girls facing Australia, who lost earlier today to Sweden, 4-2.

In other matches, Japan lost to Great Brittain, 0-1, Zambia and China played 4-4, while Canada took down Chille, 2-1. The Netherlands and Brazil split points in the derby of the day, with their match ending 3-3.

The ladies’ water polo team was ruthless against the hosts, defeating them 25-4 in the opening match of the day. This was the highest-ever win in this sport at the Olympics, but it only lasted for a few hours.

The Spanish national team broke the record with a 29-4 victory over South Africa, making their own stamp on the history of the Games.

Previously, China and Australia scored 16 goals in their wins in London, 2012, which was the record for most goals delivered by one side.

The two most dominant players in the pool today were Stephanie Haralabidis and Maddie Steffens, who had five goals each, setting the tempo and pushing their teammates towards one very confident victory.

After winning the gold at the past two Olympics, the American girls are looking to clinch the third consecutive title and become just one of few teams in any sports that managed to put together three straight titles in the world’s biggest sports competition.

In other games, Canada lost to Australia in a thriller, 5-8, while another dramatic match saw the ROC (Russian players under the Olympic flag) beating China by just one goal, 18-17.