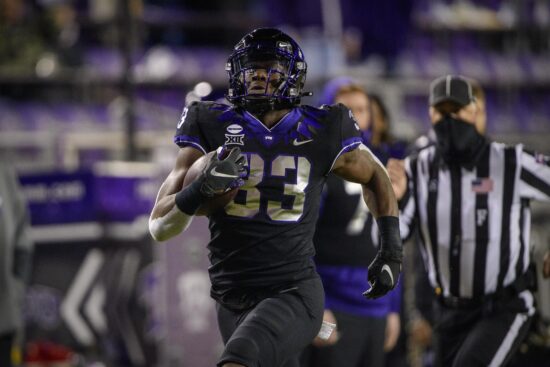 With wins over #9 Texas and #15 Oklahoma State and a near victory against Iowa State, it is easy to see why this team was never to be counted out of any matchup, yet with losses to Kansas State and West Virginia at the same time, it’s hard to tell which Horned Frogs team will show up on New Year’s Ever to play Arkansas.

Meanwhile, the Razorbacks finished at 3-7 but because this a pandemic year, they used the ability to qualify for a bowl game still after many close losses throughout their season.

Razorbacks Better Than Their Record

Like I said, this team had many close losses down the stretch. A questionable call from the officials during their game against #18 Auburn allowed the Tigers to take the lead from Arkansas late and hold on for a 30-28 victory. Meanwhile the Razorbacks just didn’t have enough in the tank to complete games against LSU and Missouri which they lost by a combined five points.

Keeping them in these close games until the very end has been their defense. They average giving up less than 35 a game, which in today’s college football will give you a top-30 defense. But what will be the key to any kind of victory will be this defense and the consistent play of Felipe Franks.

The Florida transfer has been somewhat of a spark for the Razorbacks with his ability to throw the long ball and scramble if need be. However he is leading an offense that only averages 25 points a game as they have only scored over 28 points just twice in 10 games. Franks still has 17 touchdowns to just four interceptions but the offense clearly needs another person to come step up if they are to win this one

Horned Frogs’ Duggan Doing it All

When looking at Quarterback Max Duggan’s passing stats on the year, they are nothing spectacular. He’s got less than 2,000 yards throwing and only 10 touchdowns in 10 games to four interceptions. However, using this new RPO (run/pass option) style of offense in college football, Duggan is also responsible for 10 touchdowns on the ground and has the most rushing yards of any Horned Frog player this year with over 500 which is why those passing stats aren’t in line with other quarterbacks.

As I mentioned, both these teams had near victories against teams they were huge underdogs going into the matchup but also lost to teams Vegas at least considered inferior. So for this one, I am going with the tail of the tape and taking TCU still.

The Horned Frogs have at least shown that they can win close games while Arkansas has not been able to pull one off yet this year. Furthermore I like the dynamic play of this TCU offense more than I trust someone on Arkansas to actually step up and make a play to help Franks win this game.

However I will not take the -4.5 points Vegas is favoring TCU by because Arkansas still has a habit of making games close and stick to the moneyline play New Year’s Day.