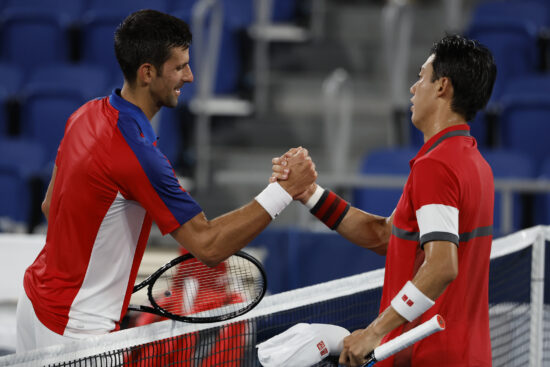 Kei Nishikori didn’t stand a chance against the world’s No.1 today, winning only two games, 6-2, 6-0. Djokovic displayed ferocious tennis, and we are more than sure that the home fans didn’t imagine seeing their favorite experiencing a humiliation like this.

Even though Novak and Kei have a strong friendship and respect outside the court, the Serb didn’t have any mercy towards the Japanese, inflicting him a 15th straight loss, arguably the toughest one so far in their head-to-head history.

The match lasted 70 minutes, with Novak preserving enough energy for the next rival, who will be his toughest challenge in the Olympics so far – Alexander Zverev.

The German was also pretty swift today, beating the French veteran Jeremy Chardy, 6-4, 6-1, securing his spot among the top four players in the tournament. He would break the opponent in the third game of both first and the second set, taking the rival’s serve and proceeding towards the victory.

Novak and Zverev have played eight times so far, and the Joker has a 6-2 advantage at the moment. They would meet twice this year on the surface like this one in Tokyo, and Djokovic triumphed on both occasions – in the ATP Cup in Australia and later on in the Australian Open.

Daniil Medvedev, the second favorite for winning the gold in Japan, was eliminated today, as he lost to the Spanish player, Pablo Carreno Busta, 2-6, 6-7.

Russian opened the match pretty badly, as time went by, his game deteriorated. Carreno Busta used that to quickly take the lead and solve the opening set, boosting his morale and removing the pressure off of him before the second set. After a tough battle, he would end up on the winning side, reaching arguably the biggest accomplishment in his career.

Carreno Busta meets Kharen Khachanov in the semis. The other Russian player had more success than his compatriot, beating Ugo Humbert after three sets, 7-6, 4-6, 6-3.

Bencic and Vondrousova Clashing for the Gold

The ladies had their semis played today, and the final will feature two very much unexpected names, Belinda Bencic from Switzerland and Marketa Vondrousova from the Czech Republic.

Bencic was better than the Kazakh, Elena Rybakina, following a big and fierce battle that lasted for three sets, 7-6, 4-6, 6-3. The Swiss player, whose biggest success at majors was the semis of the 2019 US Open, was constant throughout the entire tournament, and eventually, she got rewarded for that.

On the other side, Marketa Vondrousova is arguably the biggest sensation of the entire tournament in Tokyo. The 22-year old Czech rolled over Elina Svitolina in the semifinals today, 6-3, 6-1, adding another big name to her collection made during this tournament. Just to remind, Vondrousova eliminated Naomi Osaka, the No.1 candidate for winning the gold medal.