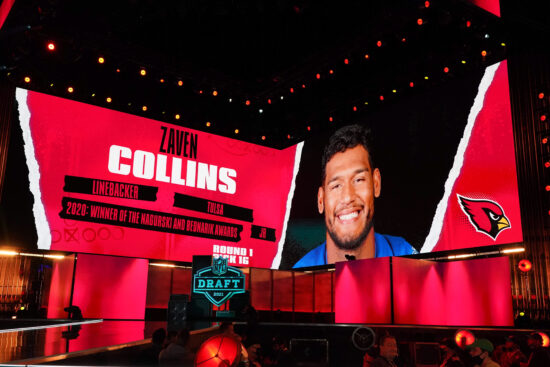 There was no controversy to be had in Arizona over their future at QB going into the draft this year, so most of the focus went towards strengthening the defence and trying to give Kyler Murray a little more help.

They picked seven times this year with the majority of those coming in the later rounds, so there will be plenty of hope that Zaven Collins and Rondale Moore are able to make an impact straight away:

One of their longer term needs is finding a replacement for the great Patrick Peterson who finally moved on in free-agency, so it looks like 4th round-pick Marco Wilson and free agent signing Malcolm Butler will be expected to pick up the slack there.

It’s still not clear if future HOFer Larry Fitzgerald will return for one more season as his future is still up in the air, but they do look to be stocked at receiver even if he doesn’t come back.

READ MORE: The biggest talking points after the 2021 NFL Draft

DeAndre Hopkins will be the obvious number 1 while A.J Green could be an interesting addition to see how much he has left in the tank.

Christian Kirk, Andy Isabella and 2nd round pick Rondale Muir complete an impressive group, so this should be an exciting offense to watch next season as long as Kyler Murray is protected well enough.