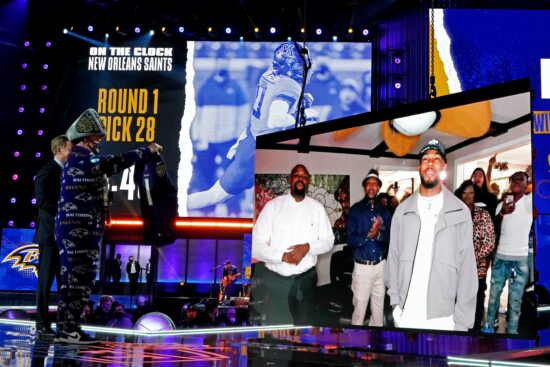 The Baltimore Ravens will continue to be one of the best teams in the NFL, but everything has to be focussed on getting over the line in January.

They have the ability to crush anyone with the running game and once they get ahead in a game the result is rarely in doubt, but the inverse is also true.

Lamar Jackson has lacked a true number one receiver who will scare the defense and demand double coverage, so it largely allows the opposition to sell out to stop the run.

READ MORE: Winners and losers after the 2021 NFL Draft

Baltimore struggle when their opponents know they simply need to sit back and defend the pass, so changing that was one of the key needs going into the draft.

The defense also needed some attention after losing Matt Judon and Yannick Ngakoue, but they had an additional 1st rounder after Orlando Brown was traded to Kansas City:

It’s a solid looking draft class for Baltimore, and there will be big hopes for Bateman and Oweh as they addressed two of their biggest needs in the first round.

There is also some intrigue in the later rounds as Shaun Wade was one of the players who was given a 1st round grade by some but he slid due to a lack of playing time, and he’s expected to make a big impact if he’s used as a slot-corner.

The big hope will be that Bateman and free-agent addition Sammy Watkins are enough to transform the passing game, and their chances of finally making the Super Bowl will be boosted if that is the case.