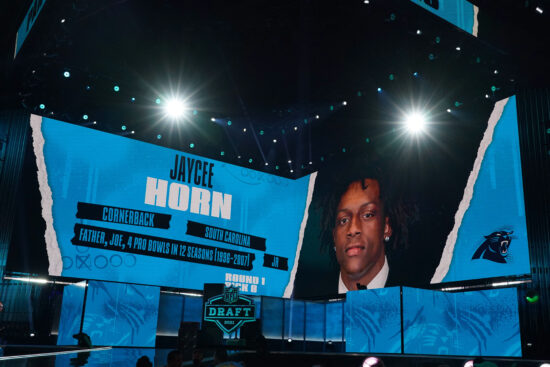 It was confirmed that the Teddy Bridgewater era was over as he was traded to Denver before the Draft, but it wasn’t clear what the future plan was.

Sam Darnold was brought in from the Jets and it was widely assumed that he would get a chance to prove himself, but there were also doubts as Carolina decided to wait until after the Draft to make the decision on his 5th year option.

They also picked at number 8 overall so the chance was there to take one of the QBs if they wanted to, but they decided to go with the first defensive pick of the draft with Jaycee Horn instead:

Although they went with a CB on that number 8 overall pick there were plenty of choices designed to give Darnold the best possible chance, and that was also reflected in no QBs being taken.

The biggest excuse for his failure in New York was a lack of weapons and plan on offense and he was largely hung out to dry, so going with a WR, TE and tackle with their earlier picks is a clear effort to avoid that situation in Carolina.

Just in case there were any further doubts on Darnold’s position, they did go and pick up his 5th year option too:

It’s one of the biggest draft hauls with 11 picks overall so it is unlikely that all will make the roster to start next season, but there are plenty of promising prospects here and the future will be bright if a few of them can contribute straight away.