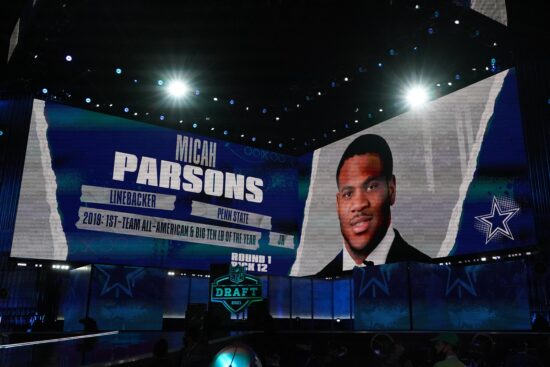 There’s a reason that most mock drafts will be way-off when it comes to accuracy, and it’s imply because logic doesn’t always play out in the NFL Draft.

The consensus was that three QBs would go with the first 3 picks, and then we would see the QB needy teams trading up into the top 10 to get their signal caller of the future.

Dallas picked at number 10 so that would allow them the pick of the defensive talent, but those plans quickly went out the window as Carolina and Denver both took CBs.

If Dak Prescott makes a clean return from injury then there’s every reason to think the offense will be excellent again, and it was the defense that was the major issue last season.

Dallas were so put-out by those CB picks that they even agreed to trade down with the Eagles in the 1st round, but it actually looks like they were able to take an extra pick while also getting a top-tier talent in Micah Parsons:

Perhaps there is an element of having a few extra shots at the raffle as they traded down to take multiple CBs, but there’s every chance that one of them will develop into the starter that they need.

The offense didn’t need any more weapons but added protection for Dak was necessary so that was also addressed, while the D-line and linebacker group get a boost too.

Their long-time defensive leader Sean Lee finally had to retire but Parsons looks like an elite prospect, and they have every chance of taking over the division if they can present a more-rounded roster next season.