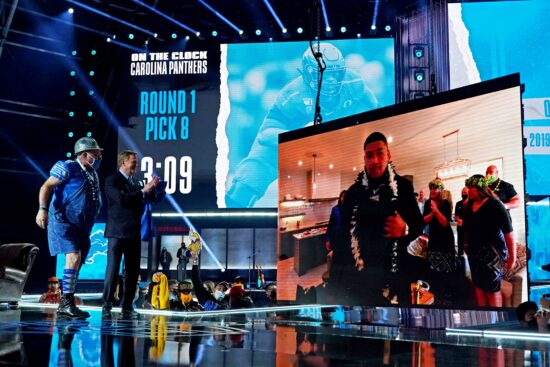 Detroit finally agreed to move on from Matt Stafford in the off-season, but there was some surprise to see Jared Goff go the other way in that trade.

There have been jokes for years about Goff in terms of him only looking competent when he had Sean McVay in his headset telling him what to do.

That’s going to be different in Detroit so we should get a better idea of just how good he really is, but it also gave them an interesting dilemma with the number 7 overall pick.

They could’ve tried to find Goff a top-tier WR1 to give him an obvious target, but they’ve taken the more pragmatic approach of keeping him upright instead with the pick of Penei Sewell.

It’s going to be an interesting season for Detroit because there’s little to suggest that they should be seen as challengers, but it’s also not clear how much faith they have in Goff.

It’s very possible that this is simply seen as a transition season and Goff gives them a chance to be competitive and perhaps he’ll even manage to get hot and lead them on an unlikely run.

The more likely scenario sees them gearing up for a change at QB in a year so taking Sewell and bolstering the defense is part of the long-term plan, but they still provide plenty of intrigue .

They’ll need to rely heavily on the run game but that also opens up the RPO and play action game which suits Goff more than simply sitting in the pocket and delivering strikes, so it will depend on how quickly he can get on the same page as his receivers.