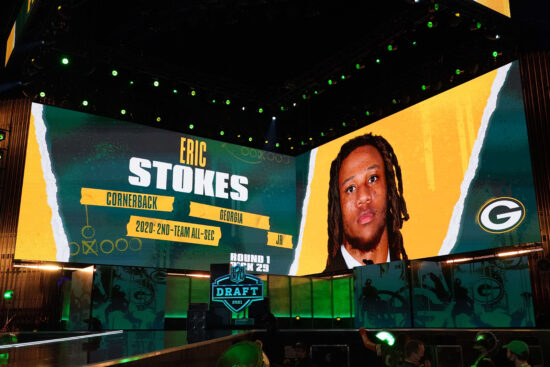 This week in Green Bay has been completely dominated by the speculation surrounding Aaron Rodgers and what the future holds for him.

The latest reports suggest that he has no intention of returning and he’s demanding that the GM Brian Gutekunst is fired.

That leaves the franchise in an impossible situation as they simply cannot allow a player to have that much power, but you also think they may have made more of an effort to keep Rodgers on side.

The stat that’s been doing the rounds recently is that Green Bay have only taken one offensive player in the first round of the draft since 2012 – and that was last year with Jordan Love.

Your more malevolent side may have secretly hoped that they would take another QB early on this year just to watch all hell break loose, but in many ways you can’t actually argue with the 1st round selection of Eric Stokes:

While you can be pretty sure that Rodgers is using the lack of offensive pick in round 1 to further fuel his grievances, you can also argue that they make the Super Bowl last year if they have someone better than Kevin King at CB.

They surely wouldn’t have given up that TD right on the stroke of half-time which left them too far behind, so Stokes does look like a logical pick.

Rodgers did get some protection with the pick of a centre in round 2 but Josh Myers is a rookie who will be expected to replace Corey Linsley so that position is probably weaker than last year too.

Some weapons were taken later on in the draft and there will be a hope that Rodgers can use his magic to elevate their game to a high level, but time will tell if he’s actually around to do that when the season starts.