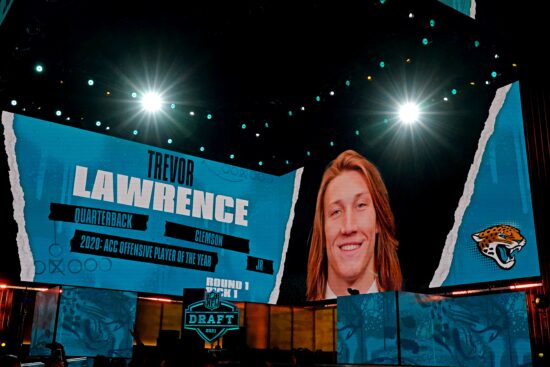 There wasn’t a great deal of mystery over what was going to happen with the number one overall pick in the 2021 NFL Draft, and the Trevor Lawrence era has officially begun in Jacksonville.

It can’t be underestimated how big a pick this is for the franchise, as the stories about merchandise sales going through the roof and tons of season tickets being sold to fans who weren’t even on the database before this weekend have begun.

Obviously Lawrence can’t do it all on his own and there were plenty of needs for the Jags going into the Draft, but it looks like they took some pretty exciting selections here:

One of the main things about taking a rookie QB is actually setting them up to succeed, and there’s a lot to like about this draft class.

They’ve immediately given him a strong running game by adding the familiarity of fellow Clemson star Travis Etienne in round 1, while outstanding rookie James Robinson gives them a great duo on the ground.

They also moved quickly to bolster the O-line so they’re trying to make sure Lawrence has the time to pick out his receivers, and some weapons were taken later on to add to some good players already with the team.

They’ve also moved to improve the defense so Tyson Campbell and C.J Henderson could develop into a solid pairing at corner if they live up to their potential, so a lot of needs have been addressed.

Of course it could still take a few years for some of these guys to reach their highest level, but things are looking up in Jacksonville both on and off the field.