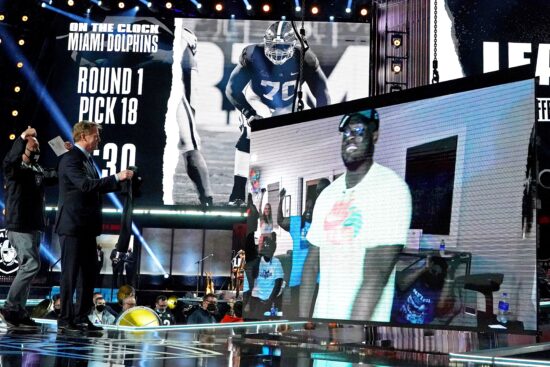 There will always be different philosophies when it comes to drafting players, but the Raiders have never been a franchise who have felt the need to follow the status quo.

You get the impression that a few organisations are obsessed with what others thinks and getting the perceived value, so they’ll play it safe and go with the consensus pick in the knowledge that they won’t be overly scrutinised if it goes wrong.

Gruden and Mayock are different with their approach as they simply take the players that they like the most, and it’s led to plenty of raised eyebrows over their first round pick this year:

The selection of Alex Leatherwood is the main talking point from this, with plenty of “draft experts” claiming that he’s been taken too early and he was likely a 2nd round type of player.

From the Raiders’ point of view they needed to bolster the O-line and he was the tackle that they were highest on, so it makes perfect sense to take him with that pick.

Interestingly Moehrig is being mentioned as a steal in the 2nd so if those first two picks were reversed nobody would be saying a thing, so you can be sure the Raiders are very happy with how things worked out.

It’s a safety-heavy raft class as they’ve added nothing to the skill positions on offense for Derek Carr to work with, but a stronger defense could be enough to turn them into legit play-off contenders.