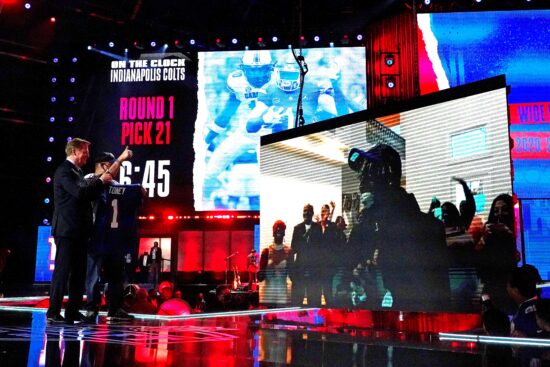 There were clear signs of improvement from the Giants last year especially on defense, and this division is there for the taking if one of the teams can sort themselves out on both sides of the ball.

Saquon Barkley missed most of last season so that put all of the responsibility on Daniel Jones, but again there were signs that he’s starting to grow into the league.

If the Giants could beef up their defense while also giving the offense a boost with a major weapon then they could be one to watch next year, and it certainly looks like they’ve been able to do that in the Draft:

The Giants traded down in both the 1st and 2nd rounds this year to amass some further picks, and there’s an interesting long-term situation to watch here.

It’s very possible that this could be the final chance for Jones to prove that he’s worthy of getting a long-term deal and securing his place as the franchise QB going forward.

He’ll have Barkley back and Toney looks like a great pick-up in round 1 so the weapons are there, but New York also have the ammunition to make a big move next year.

READ MORE: Every pick from Round 1 of the NFL Draft

The trade down with Chicago netted them another 1st in 2022 so they should have the picks to go up and grab someone if needed, and that will up the pressure on Jones this year.

In terms of the defense they needed some extra juice in the pass rush and they’ve tried to address that with these picks, but they look well set up for next year’s draft if nothing else.