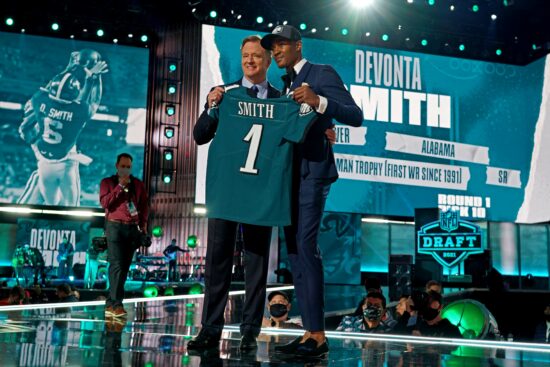 Carson Wentz was traded to the Colts in the off-season so it did open up the prospect of the Eagles taking a QB if one fell to them.

It even looked like that might be the case then they traded up with the Cowboys to pick at number 10, but the selection of DeVonta Smith does suggest they are all-in on Jalen Hurts.

The O-line also needed some attention and so did the defense, so this looks like it could be a tidy draft haul from the Eagles:

One of the biggest issues with the offense last year was the lack of talent at receiver, but Devonta looks like he could be an absolute stud so that could make a big difference.

It’s also worth remembering that last year’s 1st round pick Jalen Reagor struggled with injury and didn’t really light it up, so there will be hopes that he can break out and suddenly there will be the making of a top WR tandem there.

READ MORE: All Picks from Round 1 of the NFL Draft

2nd round pick Landon Dickerson does come with some injury concerns, but he’s also touted to have a huge upside so that could also be a steal if it works out.

It’s hard to work out who’s going to step up and win the division next year and Philly will surely need a huge season from some rookies and the 2nd year players to be competitive, but they do have the building blocks of a solid offense at least.