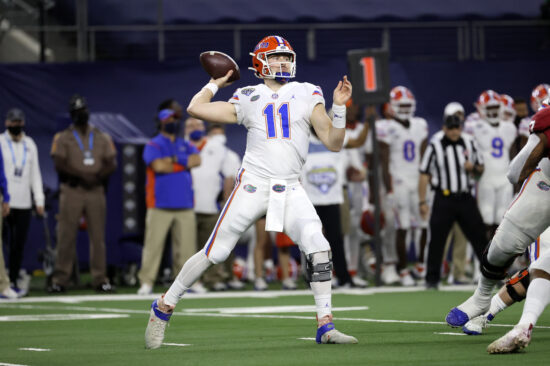 It’s very rare to see the Super Bowl champs managing to bring all of their key starters back for the next season, so this could be a fascinating season for the Bucs.

They will need to play with the target on their back so they should face a tough challenge in every game, but it also allows them to build for the future with this draft.

It’s always a risky game to pick a successor for Tom Brady because nobody every really knows when he’s going to stop, but they managed to take a solid QB prospect while also adding some depth in key areas too:

The selection of Kyle Trask is the most interesting one here as it’s very possible that he’s going to be tasked with replacing the best of all time.

That would be daunting for a lot of rookies, but he’s also landed in a place where he’s going to learn from the best, there’s a great roster in place and a coach who clearly believes in him too.

The main task from this Draft class was finding rookies who will eventually start to push for a starting role in the team.

They won’t manage to convince their best players to take team-friendly deals to stick around forever and Chris Godwin is playing on the franchise tag, so the selection of Jaelon Darden looks like an interesting one to watch.

They’ve also added some added pass rush in the first round which is always welcome, and they do need to be considered as strong candidates to retain their crown next season.