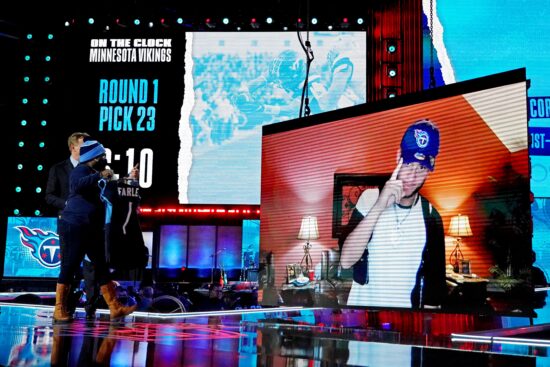 The Titans have lost several players since they came close to making the Super Bowl a couple of years ago, and they need a strong Draft class to lift them back into contention this season.

Tackle is a still a major problem as it’s hard to think of a way that last year’s 1st round pick Isaiah Wilson could’ve worked out any worse, while they also lost Jonnu Smith to the New England Patriots in free agency.

The defense let them down in key spots last year so they had to find better players to limit the passing game, while the offense needed a boost in terms of receiving talent too.

They may have landed one of the best defensive talents with their 1st round pick, but it’s another boom-or-bust type pick due to a troubled injury history:

Some of the biggest needs were addressed early on, but the main concern with Caleb Farley is his availability rather than his actual playing skills.

He’s had surgery twice on his back already and some teams weren’t confident that he would be medically cleared to play, but his upside is huge and a top-tier corner is just what was needed.

READ MORE: Every pick from round one of the 2021 NFL Draft

They will also hope that the selection of Dillon Radunz will give them a huge boost at tackle, while there could be some useful depth in this draft class too.

The Titans do have a top-level QB in Ryan Tannehill and an absolute machine at RB in Derrick Henry so they should be competitive in every game, and a big leap in the defense could see them back in contention yet again.