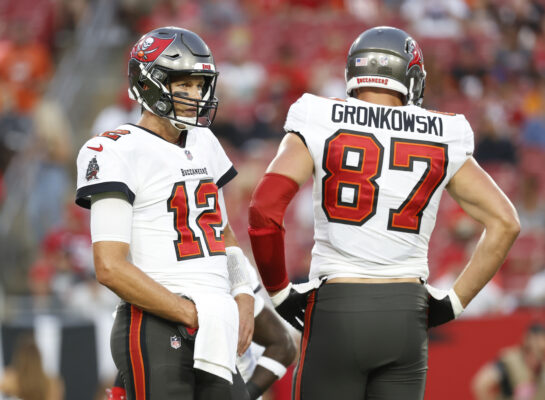 The NFC was slowly beginning to fade, having just one Super Bowl trophy in six years, but the everlasting tom Brady decided to make a switch and come to Tampa. The rest is history.

We are breaking down the National Football Conference into divisions with a short preview of each one.

South: Brady and the Bunch Clinching No.1

Since there is no Drew Brees anymore, the Saints can say goodbye to the NFC South title. It is harsh, but it is true. The Buccaneers (-225) are behind the wheel here, and if something incredibly odd doesn’t happen, we simply can’t see how they will miss the top spot here.

The Saints (+375) still have the quality for the second place, while the struggling Atlanta Falcons (+800) and the Carolina Panthers (+950) aim to finish above the last place.

If Aaron Rodgers plays like he usually does, Green Bay won’t have a worthy opponent in the NFC North. But… If the three-time NFL MVP and the Packers’ management once again open a dispute, things won’t be pleasant for the Packs. Otherwise, they won’t have too much trouble, even against the solid Minnesota Vikings (+575) who are stalking their chance.

The Chicago Bears (+220) are in a difficult situation, having a talented rookie and two veteran QBs. The Bears have arguably one of the best defensive teams in the NFL, but Mitch Trubisky managed to waste that. The sorry Detroit Lions (+2000) are at the bottom, without any real chances to attack the top spot in the assembly.

The bookmakers believe that the San Francisco 49ers (+195) have slightly better chances to win the NFC West than the LA Rams (+205), who made one of the biggest trades this summer, landing Matt Stafford in exchange for Jared Goff. In our eyes, the Rams are miles away from the 49ers, having a better defense and a better QB.

Kyle Shanahan will struggle a lot with Jimmy G’s form. Once the starting QB begins to fade (and he will at some point), Shanahan will be under heavy pressure of the public to put in young Justin Fields, and all that doesn’t sound good to us.

The Seattle Seahawks (+275) are on the decline, and for the first time, there have been some serious disputes between Russell Wilson and the management. Pete Carroll’s side missed a chance to elevate its game to a new level last year, stagnating throughout the 2020 campaign.

At last, the Arizona Cardinals (+475) are here, with JJ Watt. Even though we love Kyler Murray and the Cards, we really can’t see them competing for the top spot here.

East: Dak and the Boys, Now or Never

It is time for the Cowboys (+110) to shine. If they fail to win the NFC East this season, with all the rivals being pretty mediocre, Jerry Jones might as well dissolve this unit. May we say overpaid unit. The only rival who could make some trouble is the Washington Football Team, who, apart from solid defense and a solid running back, doesn’t really have any other qualities. Ok, we forgot Ron Rivera, but that is it.

As for the New York Giants (+450) and the Philadelphia Eagles (+500), they might occasionally shine throughout the season, but these two sides aren’t capable of entering a battle for the division title.