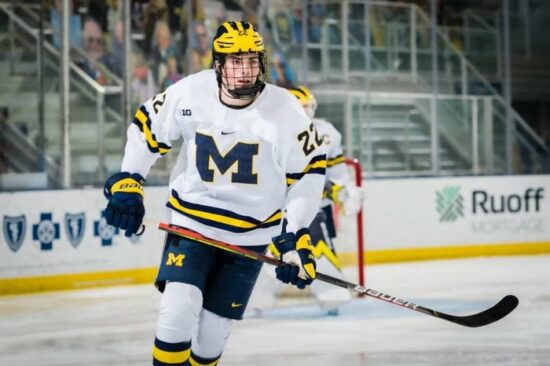 Last night was full of excitement for all the hockey fans. Several big trades were executed, and the NHL draft took place. Owen Power was the star of the night, with him being the top selection at the draft.

Sabres Getting Another Young Star

For the second time in the past four years, the Buffalo Sabres got the opportunity of picking first in the draft. Back in 2018, they took Rasmus Dahlin, and their choice now was also a defenseman, Owen Power.

Six-foot-six, 18-year old was a freshman at Michigan, starting 26 games last season and recording 16 points. The scouts reported that the lefty is arguably the best player in the country, not just on his position, but overall as well; therefore, coming into tonight’s draft, the Sabres had no doubts about their pick.

Power was called up for the IIHF World Championships this year, where Canada took the Gold, beating Finland in the finals, and managing to take the title even though they performed poorly in the group stage.

Power is only the third defenseman to enter the NHL as the No.1 pick and only the fourth player from college to do the same thing.

Per various analysts, it appears that the Sabres are not going to take the youngster immediately and intend to leave him in college for one more year. Above all, he needs more games to develop his skill set a little bit more before becoming a pro.

For the first time in 52 years, two players from the same college went one-two at the NHL draft. Michigan’s center, Matthew Beniers, was picked second on Friday night by the newly added franchise, Seattle Kraken.

Unlike Power, many believe that Beniers might jump to the NHL immediately because Kraken needs players and stars, and they are making one out of Beniers right away. He is a dynamic and versatile center with a high ceiling, and since the team from Seattle has nothing to lose, they are ready to give him a chance right away.

No.3 Anaheim Ducks took center Macon McTavish, who played for Peterborough. The Ducks needed one talented center, and they decided to go with the 18-year old who was the best option for their demand.

Up next, we will have a very interesting offseason that pretty much kicked off last night, with a massive trade that saw Olivier Ekman-Larsson traded from Arizona to Vancouver.