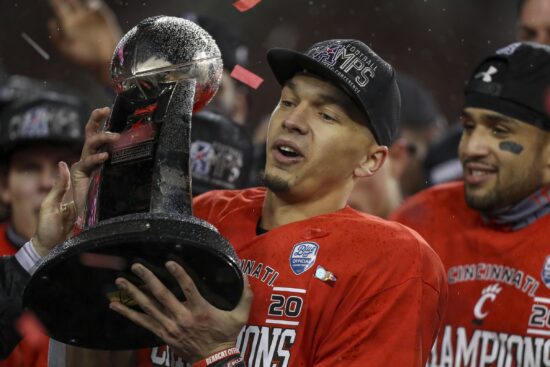 The Peach Bowl (officially: Chick-fil-A Peach Bowl) is one of the New Year’s Six Bowls that are on the program of the first day of 2021. The two teams facing off are Cincinnati Bearcats (7-0) and Georgia Bulldogs (7-2).

Linebacker Monty Rice and guard Ben Cleveland are among those who definitely won’t play on Friday. Both of them have opted-out of the game to focus on the 2021 NFL Draft.

This is going to be the 53rd edition of the Peach Bowl. Since 2018, the venue of the bowl game is the Mercedes-Benz Stadium, which has seen attendance of at least 71,000 every year. That’s not going to be the case this time, as the COVID-19 regulations limit the capacity to 25%, which accounts for about 16,500 fans.

Each school received 3,250 tickets to sell to its fans, while the rest was sold to neutrals, most of whom will probably support Georgia. After all, the 2021 Peach Bowl is taking place only about 60 miles away from the University of Georgia campus.

The Bulldogs are going to have support in the stands, but on the court, they are going to be without some of their crucial players.

The Georgia Bulldogs are going to face the Cincinnati Bearcats without some of their best players. Monty Rice and Ben Cleveland have decided not to take part in the Peach Bowl, so that they could focus on the NFL Draft.

It’s needless to say that they’re going to be missed. Monty Rice has been with the Bulldogs since 2017, and in the last two seasons, he’s been their key defensive player. In fact, his performances in 2019 had put him on the radar of many NFL teams, but he decided not to go to the Draft but play another college football season instead. However, after the competition of the 2020 season, the time for Rice to move on has finally come.

It’s a similar story with offensive guard Ben Cleveland. After spending five years at Georgia, he’s decided to move on and take part in the 2021 NFL Draft. As a result, he’s not going to be on the court on Friday when his team takes on unbeaten Cincinnati.

At the moment of writing, there are some rumors that Azeez Ojulari might decide to do the same. The Bulldogs’ sack leader is reportedly thinking about entering the NFL Draft, which would keep him out of the bowl game on Friday.

Furthermore, linebacker Jermaine Johnson is moving to Florida State, and will have to be replaced by a younger, less experienced player. Add to that a couple of injured players, and a total number of absentees in the Bulldogs roster amounts to (at least) eight.

Unlike Georgia, Cincinnati has no opt-outs ahead of the 2021 Peach Bowl. All of the key men in the Bearcats roster are fit and ready for the big game, which is going to be their first Peach Bowl in history.

The Bearcats are ranked higher than the Bulldogs, but everyone seems to agree that, when player quality is concerned, Georgia has the advantage. Still, with so many opt-outs, Georgia might not be as strong as before. However, the Bulldogs do remain the favorites.

This, of course, means that there’s absolutely no pressure on the Bearcats, which is something that can be an advantage for this team. They finished the year with all wins, with their last win of the year being the AAC Championship game against Tulsa.

The Georgia Bulldogs are labeled the favorite by oddsmakers and there’s a reason for that – they’re a fantastic team. But, so are the Cincinnati Bearcats.

Cincinnati players definitely have the quality to make the Peach Bowl a very exciting game. Maybe the Bearcats aren’t going to win, but the Bulldogs probably aren’t going to be able to cover the spread.