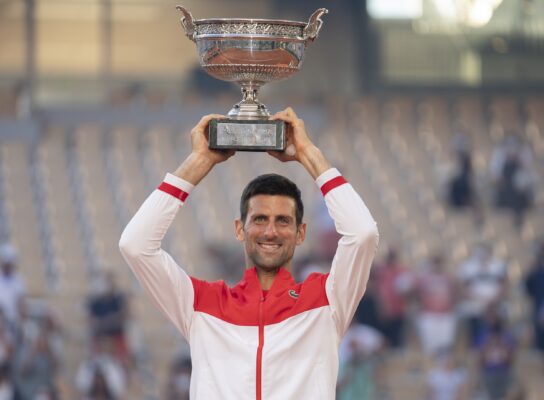 Wimbledon starts this weekend, and we are more than happy to once again see the world’s best tennis players all in one place. Some big names won’t be present, but this year’s edition is promising even without them.

Novak Djokovic and Serena Williams are both chasing history in London. Will they succeed? We’ll find that out in two weeks from now.

It’s Novak Against Everyone

In short, this is the preview for the men’s part of the tournament. The Serbian is one trophy away from reaching Rafa and Roger, and that is enough of a motive for him. But also, he is against history here, chasing the season Grand Slam, which would boost his already untouchable legacy.

At the moment, Novak is far ahead of all other rivals when talking about the odds for winning here, -105. The closest opponent is Daniil Medvedev, with +700.

However, despite seeing such a big gap, we really don’t believe that Djokovic’s win is that certain. The young lions are more and more hungry, and they want to put an end to the Big Three in tennis.

Stefanos Tsitsipas is third in line with +800, while the legendary Roger Federer, the all-time leading here in London with eight titles, is +1000 to win. Alexander Zverev, Andrey Rublev, Denis Shapovalov, all these players are in the mix as well.

For the last three years, Serena Williams has been chasing that one Grand Slam trophy that would tie her with Margaret Court atop the all-time trophy list. However, she would experience nothing but disappointments during that stretch.

The American comes to London as a slight favorite compared to all other players, with her odds being set at +400 currently. She is one step ahead of the Australian Ashleigh Barty, +500, Aryna Sabalenka, +800, and former champions Garbine Muguruza +900 and Petra Kvitova +1100.

Things in the ladies’ competition are a bit more interesting than in men’s, and many expect to see one of the closest campaigns in the last several years.

Nadal, Halep, and Osaka are Out, but Fans are In

After losing in the Roland Garros semifinals, Rafael Nadal announced his decision to withdraw from Wimbledon. It seems that Rafa’s knees aren’t ready to take such tough challenges one after another.

Simona Halep, the current champion, won’t defend the title due to her calf injury. The Romanian player has had issues for more than two months, and she played her last match all the way back in May once she withdrew from the Masters in Rome.

Also, Naomi Osaka won’t appear, as she wants to sort out her mental issues and dedicate herself to improving her overall health.

But if there is a consolation for all this, it is the presence of the audience as the English government decided to allow the spectators, of course, with a few requirements in terms of COVID-19 guidelines.