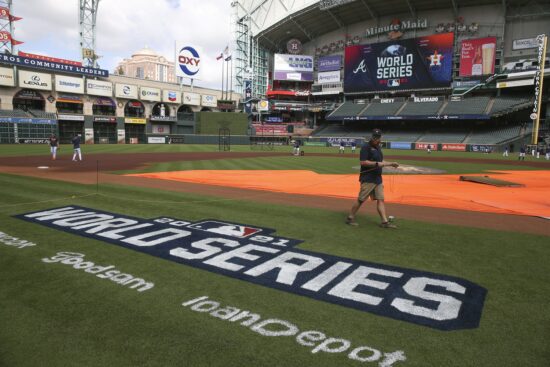 Baseball fans, we have finally made it, the 2021 World Series is upon us. In this year’s Fall Classic, we have the Atlanta Braves representing the National League and the Houston Astros representing the American League. Houston has had a streak where they have made the Fall Classic in every odd year dating back to 2017, while the Braves haven’t been to a World Series since 1999, when they were defeated by the New York Yankees, at the tail end of their dynasty. According to Caesars Sportsbook, the opening odds are the Astros at -145 and the Braves at +125 to win the World Series. Odds might be one thing, but you have to play the games, just ask the Dodgers.

Since 2000, the National League has a slight advantage, winning eleven of the past twenty-one World Series’. Let’s take a look at the past 21 years, and the winners of each year of the Fall Classic.

In-game one of the World Series, the Braves look to their right-handed veteran, Charlie Morton. Morton, who has pitched in three games this postseason, has a record of 0-1 with a 3.77 ERA over 14.1 innings pitched, while striking out 19 opposing batters. Morton last pitched on October 19 against the Dodgers. In that game Morton lasted five innings, allowing two runs on three hits while striking out five and walking six.

In the first game of the World Series, the Astros are sending their 27-year-old left-hander, Framber Valdez to the mound. Like Morton, Valdez has also pitched in three games so far this postseason, posting a 1-0 record with a 4.20 ERA over 15 innings pitched. In those 15 innings, Valdez has struck out 13 opposing batters. Valdez last pitched on October 20 against the Red Sox. In that game, Valdez pitched eight innings allowing one run on three hits while striking out five and walking one.

The Atlanta Braves haven’t been to the World Series since 1999, meaning most of their players weren’t even in the Major Leagues yet. The atmosphere could be very overwhelming for the team to start off the series. The Astros have been to the World Series every other year, since 2017, so their players are used to the big stage. Look for the Astros to take game one of the 2021 World Series, with Valdez building off of his strong start in Boston last time out.