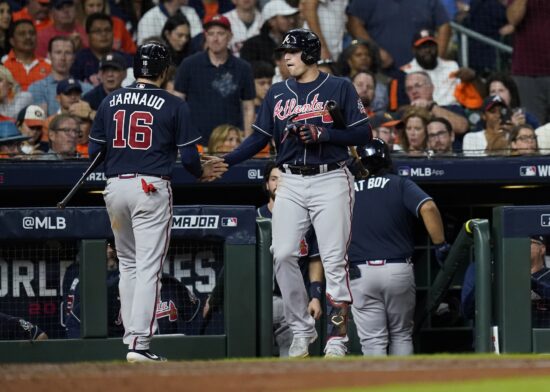 After two games in Houston, the Braves and Astros are tied at one win apiece in this best of seven series. The Braves took game one by scoring five runs in the first three innings to completely take the crowd out of the game. In-game two the Astros rallied back and scored five runs in the first two innings to get Minute Maid Park rocking and ready for the rest of the game. With the series tied at one, the winner of this pivotal game three could be a precursor to who will be raising the trophy at the end of the series. With the next three games in Atlanta, look for the Braves to try to come out of the gates quickly to get the crowd into the game.

Houston Has Found Their Offense

The Houston Astros put things together in game two to even up the series before heading to Atlanta for the next three games. The Astros started their scoring early on when in the bottom of the first inning Alex Bregman hit a sacrifice fly to center field, scoring Jose Altuve, giving the Astros a 1-0 lead. After allowing the Braves to tie the game in the top of the second inning, the Astros came right back in the bottom of the second inning. Jose Siri started the scoring on a single to second, scoring Kyle Tucker. Martin Maldonado added a single of his own, and if you couple that with a throwing error by Eddie Rosario, that equates to Yuli Gurriel and Jose Siri scoring, giving the Astros a 4-1 lead.

Taking the mound for this pivotal game three for Houston is their rookie right-hander, Luis Garcia. Garcia has pitched in three games in the postseason to the tune of a 1-1 record with a 9.64 ERA over 9.1 innings pitched while striking out 12. Garcia’s last outing was against Boston on October 22 where he pitched fantastically. Garcia pitched 5.2 innings allowing no runs on one hit while striking out seven and walking one.

The Atlanta Braves haven’t won a home World Series game since they clinched the World Series title in 1995. The Braves are looking to change that stat on Friday night, but first, let’s look back at game two. The Braves’ offense didn’t have much to show for themselves in game two. After going down 1-0 after the first inning the Braves tied the game in the top of the second inning on a solo home run by Travis d’Arnaud. The Braves’ offense couldn’t get anything else across the plate until the top of the fifth inning when Freddie Freeman hit a sharp single to left field scoring d’Arnaud, giving the Braves their second, and final run of the game.

Looking ahead to game three, the Braves are putting out their young right-hander Ian Anderson on the mound. So far this postseason, in three appearances, Anderson has posted a 1-0 record with a 2.25 ERA over 12 innings pitched with 12 strikeouts. Anderson’s last appearance came on October 23 against the Dodgers where he pitched four innings allowing one run on three hits while striking out four and walking one.

This is the most important game so far in the series, and the fans in Atlanta are excited for this moment and should play a big factor early on in this game. Look for the Braves to give their fans what they are looking for and jump out early and get to the Astros’ starter. Braves win game three, giving them a chance to win the World Series at home.