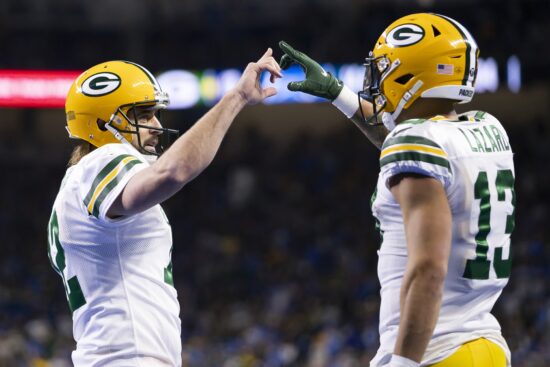 The San Francisco 49ers take on the Green Bay Packers in the NFL Divisional Playoffs. The Niners got there after beating the favored Dallas Cowboys in the Wild Card game. Meanwhile, the Packers had a bye in the first stage of the postseason thanks to the fact that they ended the regular season as the NFC team with the best record.

The 49ers vs Packers Divisional Playoffs game is going to be the second time these two meet in the 2021-22 campaign. Their first clash took place in San Francisco in Week 3 of the regular season and the score was 30-28 for the visitors.

This Saturday, the two foes meet at Lambeau Field, which is where the Packers have a 9-2 record against the Niners over the past 15 years. Online NFL sportsbooks seem to think their record is going to get even better this weekend.

Health Scares for the Niners

The 49ers got themselves a surprising win over the Cowboys in the Wild Card round. Even though the hosts were expected to win, entering the game as four-point favorites, the Niners managed to upset the odds and win 23-17.

It was surprising, the same as their drive in the final couple of weeks of the regular season. They went 4-1, booking themselves a place in the postseason thanks to an overtime win over the Los Angeles Rams in Week 18.

The question is have they run out of luck? It might be the case, especially if they end up playing with a couple of their key men – Jimmy Garoppolo (quarterback), Nick Bosa (defensive end), and Fred Warner (linebacker) – who picked up injuries in the game against Dallas.

At the moment of writing, it’s not clear whether these guys will return in time for the Divisional Playoffs, although coach Kyle Shanahan did seem optimistic when discussing his team’s injury news.

Last season, the Packers’ campaign ended at the NFC Championship game. They lost it to the Tampa Bay Buccaneers who then went to win the Super Bowl. The loss caused serious turbulence in Green Bay’s locker room, with their quarterback Aaron Rodgers even demanding a transfer at one point.

The franchise legend changed his mind eventually, signing a new contract before the start of the 2021 season. However, we could see problems reemerging if his team’s postseason journey ends early again. For the Packers, anything before the NFL Championship game is too early.

This is because they’re coming off a fantastic regular season, in which they finished at the top of the NFC table. Thanks to their impressive performances, the Packers are now seen as the #1 Super Bowl favorites.

The Packers are favored to win on Saturday for a reason. They have a much better team than the Niners, not to mention that the game is played on their turf. At Lambeau Field, the Packers have all wins in competitive games since January 24, 2021 – that’s when they lost to the Bucs.