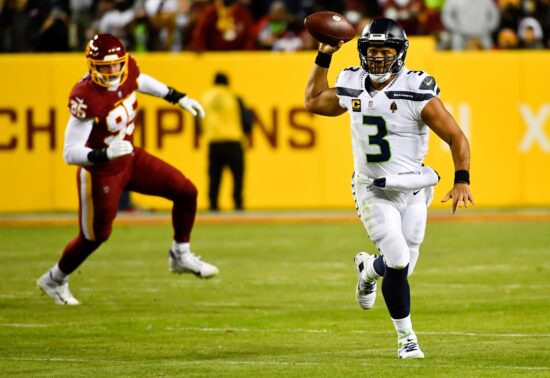 The Seattle Seahawks (3-8) are desperate for a win. Only a win against their divisional foes can keep their postseason dreams alive. The trouble is that the surging San Francisco 49ers (6-5) are coming to Seattle’s Lumen Field after three straight wins.

Can the Seahawks put an end to their superb run?

Russell Wilson Ready to Step Up

The Seattle Seahawks have been horrible this season, with just three wins so far. One of the reasons for that is that their best player, quarterback Russell Wilson, has had some injury problems. Not only did he miss three games, but he also played poorly upon returning.

The good news is that he seems to be getting back to his usual state. In Week 12, we saw him recording a 110.6 passer rating, with two touchdowns and no interceptions. Can he do better than that in Week 13?

Well, his team needs him to do better. With a win over the Niners, the Seahawks would get back in the race for a playoff berth.

San Francisco has been playing top football lately. This team is 4-1 in the previous five weeks, which has helped them get to 6-5. As things stand, they’re now in a position that leads to the postseason via Wild Card. To stay there, however, they will need to get a few more wins.

Getting a win against their divisional rival on Sunday would be ideal. However, their record against the Seahawks needs to worry them. Seattle’s record against them in the Pete Carroll era is 17-7. Further, the Niners have won only three games at Lumen Filed out of 21 they’ve played so far in the 21st century.

On top of that, Seattle won each of the previous three 49ers vs Seahawks games, including the one played in October this year. That’s when we saw the Seahawks winning 28-21, with Russ Wilson making two touchdown passes, as well as scoring one rushing touchdown on his own.

Even though San Francisco is the betting favorite, it wouldn’t be a big surprise if Seattle managed to win. After all, the Seahawks have a strong roster, they play the Week 13 game at home, and they have a fantastic record against the Niners.