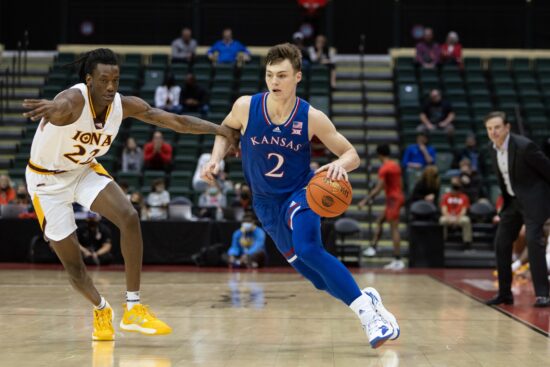 The Kansas Jayhawks and St. John’s Red Storm have both started the seasons 5-1 but each has really faced only one major test so far. Friday night is definitely a challenge for the Red Storm, but is it for KU? St. John’s has built up their record by smashing on some tomato cans, yet the Jayhawks as a top 10 team in the nation are just -7 point road favorites. That line screams upset, or at least a closer-than-expected outcome.

Kansas had a rough trip to the ESPN Events Invitational in Kissimmee, losing one of their three games 74-73 to Dayton as whopping -18 point favorites. That loss dropped the Jayhawks from #4 to #7 in the country. With then #1 Gonzaga losing the same weekend, and new #1 Duke falling to Ohio State in their first game atop the polls, the loss to the Flyers likely cost Kansas a chance to be the #1 team in the country right now.

You can’t change the past though, and to their credit Kansas did a good job of regrouping in a strong way, finishing the tournament with a 96-83 win over Iona, falling just short of covering the -13.3 spread though. Christian Braun had 18, and Ochal Agbaji added 17 as KU went over the 90 point mark for the first time this season.

KU can score the basketball as evidenced by four of their six games going over the 85 point mark this season. Agbaji leads the way with 22.5 ppg while Braun (13.8) and Remy Martin (12.0) both chip in over a dozen per contest. The Jayhawks’ 83.8 points per game are 18th in the country and their 52.1% shooting percentage from the floor is 4th best in the nation – and all this comes with preseason All Big 12 pick David McCormack struggling with just 8.2 ppg and being phased out of the rotation.

Friday night will be a test to see if St. John’s impressive start to the season is because they are legitimately good or it’s due to playing a very soft schedule. The Red Storm come into the Kansas game on a three-game win streak, but they’ve beaten Fairleigh Dickinson, St. Francis, and the New Jersey Institute of Technology over that span.

What’s wild about the last three wins for St. John’s is that they were supposed to dominate each of them as -22 point favorites or better but have barely been squeaking by. The 87-74 win over Fairleigh Dickinson isn’t that impressive considering they were 32 point favorites and the wins over St. Francis (76-70 at -26.5) and NJIT (77-68 in OT at -22.5) are borderline embarrassing.

So now we’ll see if maybe St. John’s has just been playing down to their competition the last three games. They did hang tight in a visit to Indiana earlier this season (76-74) and have the talent to roll with KU led by Justin Champagnie who averages 21.3 ppg. Champagnie’s brother was a dominant player for Pittsburgh last season who is in the Toronto Raptors organization. Posh Alexander (14.6 ppg) leads a trio of three other players averaging in double figures and who have led St. John’s to put up 87.3 ppg, which is 7th most in the country.

This line looks like it should have been Kansas by double digits which does raise a red flag. St. John’s can score, but you have to wonder how much of those numbers are just a result of playing inferior competition? The line is screaming to take the Red Storm, but Kansas is just too talented and needs this win.