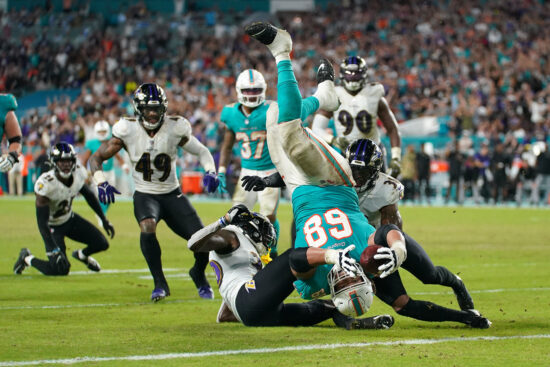 We usually see that every division has at least one team that stinks, and for the AFC North that was the Bengals over the past couple of years. That was always bound to turn around after they took Joe Burrow in the 2020 Draft, but this could be the most exciting division in football this year:

If Baltimore had beaten the hapless Miami Dolphins last night then they would’ve taken control of the division, but Brian Flores drew up a blitz gameplan for the ages, and Lamar Jackson was largely kept in check. That means the Steelers can draw level if they take down 0-8 Detroit this week, while the Browns travel to New England to face the Pats and the Bengals have their bye week.

There’s no doubt that the Steelers should tie this up at the top of the standings after Week 10 unless something goes terribly wrong, but Baltimore are still seen as the worthy favorites for one reason – Lamar Jackson.

It’s still such a tough division to call because every team appears to go on a run before something throws them off. Baltimore have now been shut down by Miami and the Bengals so they aren’t infallible, while Cleveland has ongoing issues with injuries and Covid-19 and are seen as the underdog against New England in Week 10.

Pittsburgh have a great defense but the offense isn’t explosive and that will cost them games, while the Bengals started to look legit until they lost to the Jets so they can’t be trusted either.

Who will win the AFC North?

This isn’t quite a pick’em situation yet as a couple of defeats could open up some space in the divisional race, but you can also see this bunching up even more with two or three teams having the same record.

I don’t like the Bengals or Steelers this season to win the division, but the Ravens do have a run-in that features five divisional matchups and the Rams and Packers, so I can see the Browns finding a way to win it.