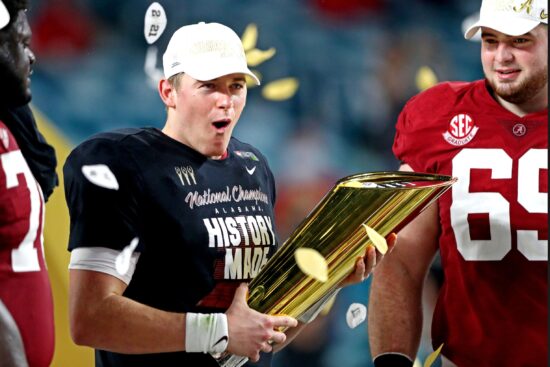 Ohio was trying to keep it up with the top-ranked team in the country, but they lost pace near the end of the second period, once Alabama closed the halftime with two touchdowns inside one and a half minutes. On both occasions, it was DeVonta Smith who took the football into the end zone with Mac Jones connecting with his favorite target. The result at the break was 35-17 for the champs.

Smith had three touchdowns in the opening half, catching 215 yards in 12 receptions. The Heisman Trophy winner had to go out due to an injury and didn’t play in the second half, but Alabama’s domination wasn’t jeopardized.

Najee Harris also had three touchdowns, but the RB rushed for two and had one receiving score. He opened the show after 6:53, with a one-yard run, having a 26-yard TD reception midway through the second quarter. Harris scored the last TD of the game 1:45 inside the ultimate sequence.

Mac Jones’ performance was also thrilling, with the young quarterback posting five touchdown passes and a record for any CFP championship game – 464 passing yards. Jones found Smith three times, Harris and Slade Bolden once each. It was a pleasure to watch him completing 36 of his 45 passes, creating history, and orchestrating one of the most vicious attacks in NCAA football history.

On the other side, the Buckeyes had no chance of winning the title. They kept Bama’s pace in the first period but couldn’t follow the tempo as time went by. Justin Field had 194 yards for a TD pass and ran 67 yards. According to sources close to Ohio State’s locker room, he experienced some difficulties following a nasty hit received in the CFP semis against Clemson.

Additionally, Trey Sermon, one of the best rushers in NCAA, had to leave the field after just one rep, picking up an injury that would severely deteriorate the Buckeyes’ chances of making an upset against the favorites.

With tonight’s win, Alabama’s head coach Nick Saban became the No.1 on the all-time list with seven national championship titles, one more than the Roll Tide’s legend Paul “Bear” Bryant.

His impact on the NFL is enormous, as Saban produced numerous players who would jump to the league and become megastars. Some of the current examples are Derrick Henry, Tua Tagovailoa, and Jalen Hurts.

After tonight’s match, Saban stated that this generation is the best one he coached. The group’s cornerstone was the 2017 recruitment class, led by Jones, Harris, and Smith, who played its last season in the NCAA. All three are getting ready to shine at the upcoming NFL draft night, with the experts predicting them to become first-round selections.