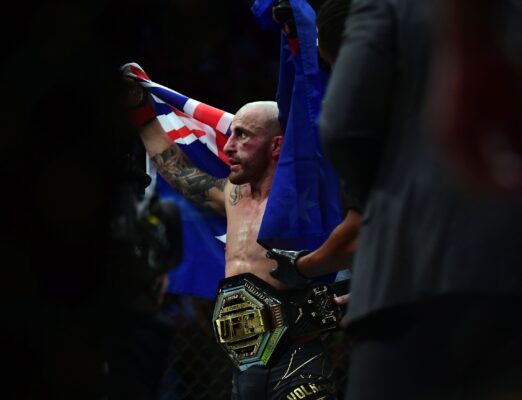 Alexander Volkanovski is fresh off his fourth straight title defense in the featherweight division, dispatching of former champ Max Holloway at UFC 276. After the fight, Holloway called Volkanovski the best pound-for-pound fighter in the MMA universe, a claim the Australian fighter is more than willing to accept.

To prove to the world that he’s the GOAT, Volkanovski might have to challenge ex-lightweight kingpin, Charles Oliveira.

Yes, that’s right – Volk is ready to challenge the tile in another weight category. In the octagon interview with Joe Rogan, Volk confirmed he wants to move to the lightweight division.

“I wanna be busy. I don’t think this division can keep me busy. I wanna move up, go for double champ… I need two divisions to keep me busy.”

Even though Oliveira is no longer the champion — after missing weight at UFC 274 — he is still seen as the best lightweight fighter in the world. This explains why top MMA betting sites see him as the favorite in a potential clash with Volkanovski.

Volk Going for the Double-Champ Status

Only four fighters in the history of the UFC had two championship belts in their possession at the same time. The first man to do it was Connor McGregor who was the champ in the featherweight and lightweight divisions back in 2016. His reign as the “champ-champ” lasted until Khabib Nurmagomedov took away the lightweight belt from him at UFC 229.

Fast-forward to 2022 and Volkanovski wants to follow the same path, minus the last part. So far, he’s got one half of the job done. He’s the UFC featherweight champion who’s without a single loss in this division. In fact, his overall record is 25-1 with his only loss happening in 2013 when he was fighting in the welterweight division of Australian FC.

And what about his record in the lightweight division? Volk made his lightweight debut in 2014 while fighting for Roshambo MMA. He defeated his opponent in Round 1, winning the championship belt. From there, he went on to win two more lightweight fights in Wollongong Wars – an Australian MMA championship.

It was November 27, 2016, when he made his UFC debut, beating Yusuke Kasuya by TKO in a lightweight bout. However, since then, he hasn’t fought another fight in the 155-pound class.

The fact that Volkanovski hasn’t fought a lightweight fight in nearly six years is just one in a long list of reasons why Charles Oliveira is seen as the betting favorite in their potential fight. Another, much more important reason is that the Brazilian fighter has been an absolute ruler of the division, in which he used to hold the belt for 12 months.

What’s interesting is that he didn’t end up without his championship belt by losing a title-defending bout. On the contrary, he defended his title twice but was stripped of the championship for missing weight.

Oliveira’s current record is 33-8 with 11 straight wins in the UFC. Most of his wins happened by submission. In fact, with 21 submission wins, he’s the UFC record-holder.

Although it’s still uncertain whether the fight will actually happen, if it does, we believe it’s Charles Oliveira who’ll triumph. Volkanovski stands no chance on the floor against the UFC grappling king; the only way to beat Oliveira is to knock him out. Unfortunately for Volk, Oliveira is used to fighting against elite strikers.