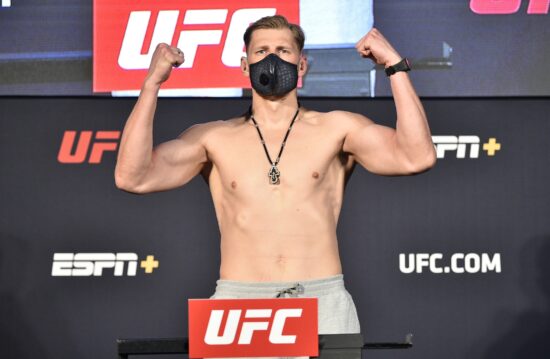 Alexander Volkov defeated Alistair Overeem in the main event of the UFC Fight Night 184. In the co-main event, Cory Sandhagen was ruthless against another veteran, Frankie Edgar, inflicting him a devastating KO defeat.

Volkov Going Towards the Top

At 2:06 of the second round, the referee in the ring, Jason Herzog, waved his hands, pushing away Volkov (33-9) from Overeem, who was on the floor after a beating he will remember for a long time. The Russian giant’s left and right sent the Demolition Man to the ground, securing his 33rd career win, seventh in the UFC.

Volkov was much better, dictating the tempo and controlling the situation all the time, while on the other side, Overeem (48-19) had his worst performance in years.

He didn’t have any idea on how to stop the opponent’s long left jab, and not only that, but he struggled to keep his stance and guard consistent, earning a broken nose and bloody face half the way through the first round.

The Dutchman was slower, and his movement inside poor the ring allowed Volkov to have him as an easy target. One-two punches were practically the only thing besides the jab that brought the win for the Russian.

Right now, the 32-year old, and the former Bellator champion has three wins in the past four contests, with that single failure coming against Curtis Blaydes, who was more than dominant in their meeting.

Volkov will surely be among the top five heavyweights following this battle. According to the majority of experts, he will clash with the winner of the bout between Jairzinho Rozenstruik and Cyril Gane, in what is probably going to be a title-eliminator.

As for Overeem, his title dreams are over. Not only because of a loss, but due to his age and the fact that he isn’t among the elite UFC heavyweight company anymore. His decline is obvious, and the legendary Dutchman, unfortunately, won’t win the UFC belt, regardless of our sympathies for him.

Twenty-eight seconds. That was the time needed for Cory Sandhagen to finish the former UFC lightweight champion, Frankie Edgar. And not just finish, but post a spectacular knockout, which could easily win the KO of the Year award.

Sandhagen’s flying knee landed perfectly on Edgar’s face demolishing Rocky, and stopping the fight. Just four months ago, in his previous battle against Marlon Moraes, Sandhagen posted one other KO that amazed the world.

Back then, the 28-year old beat the Brazilian via spinning heel kick, which was stunning at the time. It earned him the Performance of the Night bonus, the same as last night’s KO.

Following the fight, Sandhagen announced his attack on the throne, which is currently held by Petr Yan, who will defend it against Aljamain Sterling at the UFC 259. He was pretty confident in his abilities, predicting a win over whoever comes out as the champion after that clash.

Sandhagen’s ceiling is very high per various experts, who predict a bright future for the guy from Aurora, Colorado.