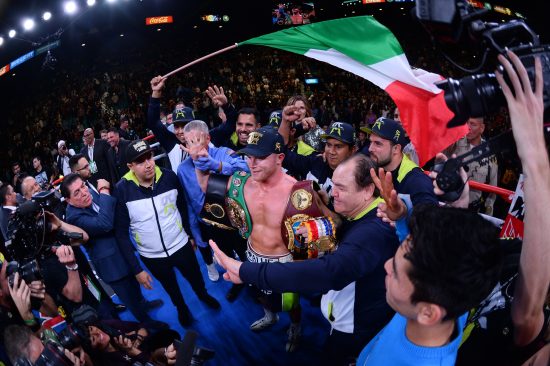 One of the biggest names in professional boxing is set to return to the ring before the end of the year, as it has been reported that an ‘agreement’ has been reached between Canelo Alvarez and Callum Smith. The decision will be huge news for fans, as it means that the pound-for-pound boxer will finally fight for the first time as a free agent.

Alvarez was finally granted his wish to become a free agent last week, as he was released from long-term deals with Golden Boy Promotions and DAZN. The deal between the boxer and the other parties was believed to be the biggest in the history of sport, as it was worth a reported $365 million for eleven fights.

Alvarez vs Smith Likely Before The End Of The Year

One of the biggest reasons for the breakdown in the relationship was the fact that Alvarez didn’t believe that organisers were picking tough enough fights. Since the deal was signed, the Mexican light heavyweight champion has beaten Rocky Fielding, Daniel Jacobs and Sergey Kovalev. The latter of those being his most recent bout, where he won by KO in the eleventh round at MGM Grand in Las Vegas.

That last fight took place in November 2019, which means that it has been over a year since we last saw the Mexican fighter in action. However, ESPN Mexico are now reporting that Alvarez’s long wait for a 57th professional fight could be over, as a deal between the Mexican and Callum Smith is close. Not only that, but there is also a potential date that the bout could happen.

The huge middleweight bout could happen either the 17th or 18th December according to the latest reports. With the fight also likely to take place in the vast AT&T Stadium in Dallas. The size of the venue will ensure that fans will be able to be in attendance for the huge night of action; albeit socially distanced. Smith would present a huge opponent for Alvarez, with the British fighter having a perfect 27-0 record at present. Smith is rated as the best super-middleweight in the world by the Transitional Boxing Rankings, as well as ESPN.

However, like Alvarez, Smith also hasn’t been in action in 2019, with his last fight coming against John Ryder in November 2019. The undercard could also be beginning to take shape, with Ryan Garcia tweeting that his rescheduled bout with Luke Campbell could take place on the undercard.

The two boxers were scheduled to meet in the ring at the beginning of December, but it was pushed back after Campbell tested positive for COVID-19. The new date could potentially work for the British fighter as it will give him a few weeks to go back to his peak.

However, Eddie Hearn, who is Smith’s promoter, has urged fans to remain calm after the latest reports circulated insisting that a deal is yet to be agreed between the parties.