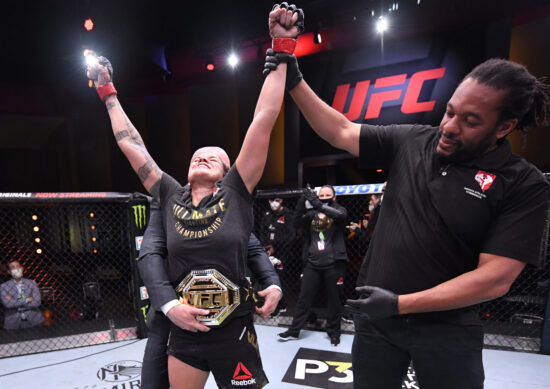 Two-weight champion and Brazilian Amanda Nunes is set to return to the octagon on December 11, 2021.

Nunes, 33, currently holds the women’s bantam and featherweight titles and is widely regarded as the best female mixed martial artist in the world.

The talented striker fights out of American Top Team – a world-renown gym founded by Daniel Lambert and run by coach Mike Brown.

Family Life with Wife and Baby

Nunes is the first openly gay female to become a UFC champion.

The South American is married to Nina Nunes (formerly ‘Ansaroff’), who also fights in the UFC, in the strawweight division.

The pair first met while training together with American Top Team and both signed their UFC contracts in 2014.

With their relationship going from strength to strength, they got engaged in 2018 and are now married.

In an effort to start their own family, Nina fell pregnant and the pair welcomed their baby daughter Raegan Ann Nunes into the world in September 2020.

The 33-year-old has endorsements with both TEN spring water and Reebok and has a reported net worth of $4 million.

Having made her UFC debut at UFC 163 all the way back in 2013, Nunes has fought in the promotion for nearly 10 years.

After beating Miesha Tate for the bantamweight title at UFC 200 in 2016, Nunes has already successfully defended the 135 lb strap on five different occasions, including a 2017 victory over flyweight champion Valentina Shevchenko.

Currently boasting an overall professional record of 21 wins and just four losses, there is very little debate over Nunes’ stature within women’s MMA.

Looking to continue her stunning 12 fight win streak, Nunes’ 26th professional fight is scheduled to take place at UFC 269 on December 11, 2021, and will be against number four ranked contender Julianna Pena in the event’s co-main.

UFC 269 is set to take place at the T-Mobile Arena in Las Vegas, USA, and will be headlined by a lightweight title showdown between champion Charles Oliveira and Dustin Poirier.