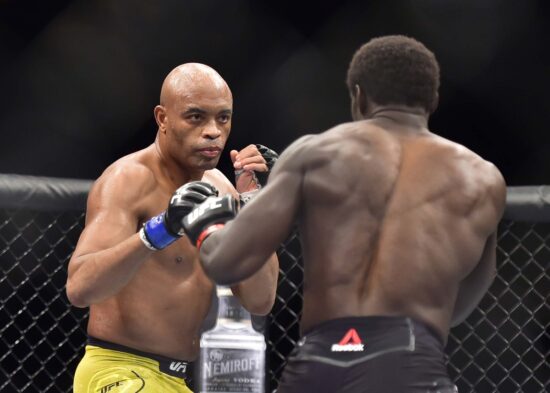 Anderson Silva and Julio Cesar Chavez Jr. go toe to toe on Saturday evening in the co-main event of a PPV taking place in Mexico. It’s supposed to be an interesting dust-up for several reasons. For one, the 46 years old UFC legend is making his return to the boxing ring after 16 years.

Secondly, the fight was contracted for 182 pounds, which is something Chavez has never done before. Nor will he this time! A day ago, the 35 years old Mexican missed weight, for which he will have to forfeit $100,000 of his purse to his opponent.

Julio Cesar Chavez Jr. won a world title at 160 pounds. It happened a decade ago, and since, we haven’t seen him achieving much. This goes especially for the bouts fought above 168 pounds.

Ahead of the Anderson Silva vs. Julio Cesar Chavez Jr. fight, the former champ is 184 pounds heavy, two more than what was agreed.

This isn’t the first time Chavez has missed weight. It happened at least three times in the past, most notably two years ago when he squared off with Daniel Jacobs. For that, the Mexican had to forfeit a million dollars to the rival.

This time, the punishment isn’t as severe – his purse is going to be 100k short.

Although Chavez is only two pounds over the top, the fact that he’s missed weight once again has made people wonder about his professionalism.

Unfortunately, it’s not just about the weight. Over the last couple of years, Chavez has been a regular feature in the yellow press. Drug problems, relationship issues, you name it – he’s had it all!

Anderson Silva is one of the most successful MMA fighters in history. He’s the man who holds the UFC record for the longest title reign – he had the championship belt in his possession for 2,457 days!

However, his glory days in the UFC are long gone. Since losing the Middleweight Championship title in 2013, Anderson’s career followed a downward path.

In fact, he lost six of the following eight UFC fights, one of which was a no contest.

Knowing this, it’s no surprise he’s decided to ditch MMA for boxing. The question is whether he has what it takes to do well in the boxing ring?

No one can say for certain as Silva’s only fought two boxing bouts in his life. His most recent bout happened in 2005, while his professional boxing debut happened in 1998.

On the other hand, he is famous for being very good with his hands in the octagon. Actually, this guy’s won 23 of his 34 MMA fights by knockout.

Who will win this fight:

Chavez, probably. Sure, he’s far from being the man he was a decade ago, but we mustn’t forget that he is a professional boxer. Anderson Silva isn’t…

Still, this doesn’t mean Chavez is going to have a field day tonight. On the contrary, it’s very possible that the fight will go the distance.