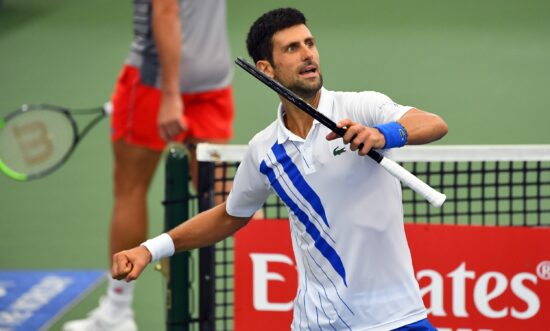 The world no.1 Novak Djokovic is favored to win this tournament, which would be his ninth Australian Open title. The odds on Djoker winning the tourney for the third time in a row are +550.

So far, he’s been on the good road to defending the title, despite struggling against Fritz in Round 3. So far, Djokovic still hasn’t faced as tough of an opponent as Milos Raonic. On the bright side for Novak, he’s got some wonderful experiences playing against the Canadian.

The match between Djokovic and Fritz lasted for nearly three and a half hours. Before the match, it seemed Novak was going to get the job done easily. However, Fritz showed he can be a very tough nut to crack.

He took the first set into the tie-breaker, which Novak won. The second set was close as well, even though Djokovic managed to win it by 6-4 in the end. But, then, the third set came.

At this point, everyone was expecting Djokovic to seal the deal but Fritz refused to let him do so. The American won that set. And he won the next one as well before finally losing in the fifth set.

Taking two sets from Djokovic is something that doesn’t happen very often, especially not when he’s playing at his favorite tournament.

Novak Djokovic’s love affair with the Australian Open started in 2008 when he won it for the first time. Since then, he’s snatched seven more trophies, thus setting his tally to eight AO titles.

That’s more than any other player has achieved. We’re not just talking about the Open era, but the entire history of the tournament. Not only is he the record-holder when Australian Open Men’s Singles titles are concerned, but he’s made many other achievements at Melbourne Park, including:

Novak’s dominance in Melbourne is often compared to Rafa Nadal’s success at the French Open. In fact, some believe that Djokovic’s Australian Open success is underappreciated. The good news is that he’s got a chance to silence his critics and show the world he’s the king of Melbourne Park.

To do that, Serbia’s finest needs to win the 2021 Australian Open. So far, he’s on the right road to the title. The next step on that road is the Raonic vs Djokovic match, which tennis oddsmakers believe Novak will win.

Raonic and Djokovic have met 11 times in history. Novak won all of those matches. And that’s not even the most impressive fact about Raonic vs Djokovic matchups!

What’s really impressive is that Djokovic lost only two sets in those 11 matches. In their previous two meetings, Djokovic won in straight sets on both occasions.

This weekend, the two met again at the same location. However, unlike in 2020, there will be no fans in the stands this time.

No Fans at Melbourne Park

The Australian state of Victoria, where Melbourne is located, is entering the third lockdown since the start of the COVID-19 pandemic. It starts on Friday at midnight and will last for five days. People will have to stay at home and avoid large gatherings.

As a result, there will be no fans allowed in the stands at Melbourne Park over the next five days. The question is whether this will pose a problem to Djokovic and Raonic?

Both players played several tournaments with no fans last year, most notably the 2020 US Open. It wouldn’t be an overstatement to say that both of them did badly at that tournament.

Raonic got knocked-out in Round 2 by his fellow Canadian Vasek Pospisil. Djokovic got disqualified for hitting the lineswoman in the throat with a tennis ball.

Who wins the Raonic vs Djokovic match:

Djokovic does, there’s no doubt about that! In fact, losing to Raonic in Melbourne would be even more shocking than getting disqualified in New York.

Oddsmakers know this, which is why the odds on Djokovic beating Raonic aren’t that attractive. But, can he win in straight sets? We say no! If Fritz managed to snap two sets off Djokovic, Raonic can too.