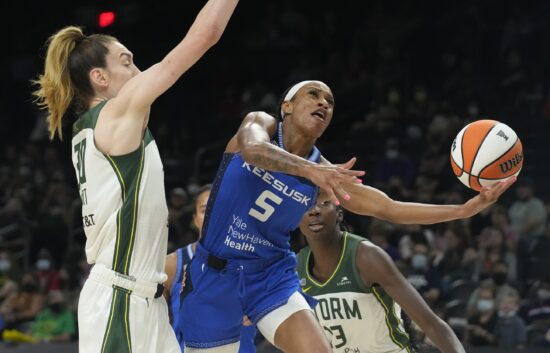 It has been a captivating season in the WNBA this term, but the drama will only step up a gear when the playoffs get underway at the end of this month. The top eight teams will move into the playoffs, but which team is currently the favorite to win the Championship this season?

Seven of the eight teams that will be playing in the WNBA playoffs have already been decided. The eighth team that will be playing in the post-season is set to be decided over the closing rounds of games, with the Washington Mystics, Los Angeles Sparks and New York Liberty still in the mix for the eighth spot. Teams that finish in the places between fifth and eighth will need to enter the playoffs at the first round, with only the two winning sides making it through to the second round.

The winner of the first-round tie pitting fifth and eighth together will then clash with the team that finished the regular season in fourth. Meanwhile, the team that comes out on top in the battle between sixth and seventh will face the third-seeded team from the regular season. The top two sides in the standings (currently Connecticut Sun and Las Vegas Aces) will enter the playoffs at the semi-final stage.

The top two in the betting are extremely hard to oppose when it comes to selecting a winner of the WNBA Championship this season. The Connecticut Sun will be hoping to put a dismal record in the finals behind them, and claim a first victory at their fourth attempt. They have been beaten in the finals on three previous occasions, most recently in the 2019 season when being beaten by the Washington Mystics.

However, their record this season has been outstanding, as they have a win percentage of .800, and have been beaten on just six occasions. Their home record is the best in the WNBA, as they have lost just once in their 13 games.

The Las Vegas Aces certainly look to be the franchise that is best placed to challenge the Sun, as they have won 22 of their 30 games in the WNBA this season. The Aces are also looking for a first championship, after losing on their last two appearances in the final, including last season against the Seattle Storm.

Who will win the WNBA Championship this season:

Cases can be made for both of the franchises at the top of the betting. However, we feel as though this season’s championship is the Connecticut Sun’s to lose. They have been outstanding throughout the regular season, and if they maintain that form, then they will be incredibly difficult to stop.