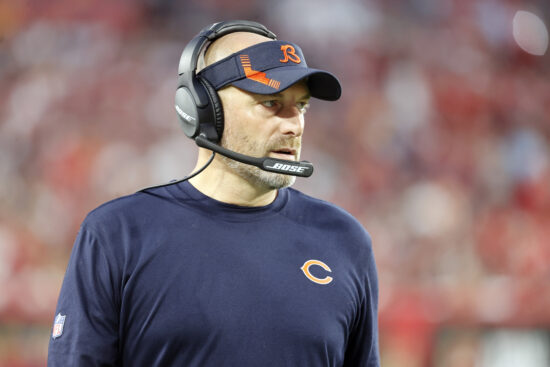 The Lions are still without a win this season, and according to many, they’ll stay like that. It seems that they want the top pick at the next NFL draft, and don’t care about this campaign too much.

Chicago simply keep finding ways to lose games, and the latest odds do suggest that Matt Nagy is likely to be the first coach fired unless something changes very quickly.

It’s Time for Nagy to Leave

The Bears have a losing mentality. That is a fact. Losing to the Baltimore Ravens on Sunday is the best possible proof of our claim. Head coach Matt Nagy is the guy who is responsible for this. Even when the Bears were considered a dark horse for the Super Bowl champions, they had some tragic losses. And again, it was all Matt Nagy. These words might be harsh, but it is time for him to leave.

Justin Fields picked up a rib injury, and he probably won’t play on Thursday. Even if he manages to recover, there is no need for the Bears to rush with getting him back on the field.

Andy Dalton was quite good against the Ravens after coming in to replace the rookie. The veteran threw 201 yards for two TD passes, including the go-ahead score in the finish. That one was forgotten fast because of his teammates’ terrible defense, which allowed the Ravens to win.

After earning a tie against the Pittsburgh Steelers, the Lions went toe to toe with the Cleveland Browns in Ohio. The hosts had a jump start, but the Lions responded in the second half, calming down the rivals’ fans and making them a bit nervous. The final result was 13-10 for the Browns.

D’Andre Swift had a 57-yard run, racking up 136 rushing yards in this one. He already surpassed the last year’s stats, reaching 555 yards on the ground. Though he only has four TDs, twice as few as in 2020.

QB Tim Boyle, was, let’s say, disastrous with 77 yards on 15 completions with two interceptions. While TJ Hockenson was the top receiver in this one had 51 receiving yards.

These franchises have met 183 times, with the Bears recording 103 wins, Detroit 75, and five games were without winners. For those who forgot, they are the NFC North rivals.

The Bears won six of the past seven, including this year at home, 24-14.

The Bears will need to win this matchup; otherwise, even a theoretical chance for their playoff appearance is done. It will be a hard task for Nagy and his crew, especially after a kick in teeth from the past Sunday once they lost what was practically a closed game against the Ravens. But on the other hand, Chicago faces the worst team in the NFL.