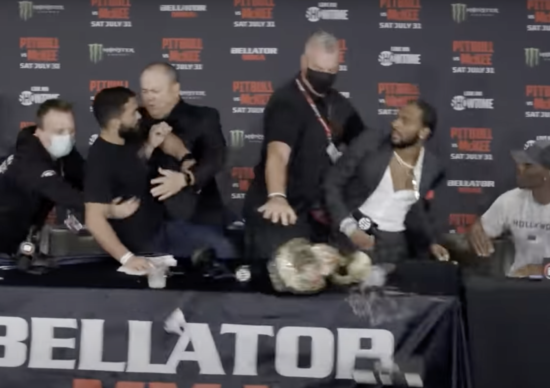 In the build-up to what is expected to be the go-to mixed martial arts event of the weekend, Bellator featherweights Patricio ‘Pitbull’ Freire and AJ McKee almost got the party started early.

Speaking during Bellator 263’s official press conference, the pair, who exchanged a barrage of heated words, eventually clashed after McKee snatched ‘Pitbull’s’ belt away from him.

Reacting furiously, Freire was quick to lash out before the title challenger threw a kick – narrowly missing the Brazilian.

Check the footage out below courtesy of MMA Fighting’s official YouTube channel.

The pair’s Bellator 263 title showdown is scheduled to take place at 9 pm ET, on July 31, 2021, and will be broadcast live on Showtime from The Forum in California.