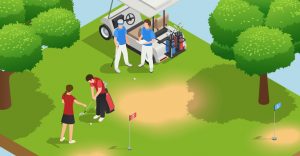 We have witnessed quite a few worthwhile events over the last few weeks in the PGA Tour. The CJ Cup and Zozo Championship both proved spectacular and worthwhile fixtures on the golf calendar. Now, we are heading to Bermuda Championship on Thursday, October 29 at the Port Royal Golf Course.

With a hefty prize purse at $4 million, there are quite a few players coming back to the course, including Brendon Todd, the 2019 winner. He seems to have a great chance to secure the title once again as he is a rare breed, the only player to turn up from the world’s best 50 golfers.

Yet, the lack of competition from the top tiers of the golf world shouldn’t be something that makes you turn away. Rather, you should be looking for new up and coming prospects, and this is what we will do here precisely. The event features 132 players and 72 holes.

Where and When to Watch Bermuda Championship?

From Brendon Todd, the PGA Tour has been a mixed bag. He has done his best to try and stick with the higher-tier golfers, but his most recent noteworthy performance was during the BMW Championship back in August when he finished T8.

He definitely didn’t shine much at neither the Zozo Championship (T47) nor the CJ Cup (T52). So, why are the odds favoring Todd? Mostly because most of the other players on the ticket aren’t tested in the same crucible as Brendon has been thrown over the past several years.

He has played some of the best golfers repeatedly, and the fact that nobody on the list is in Top 50, except for him, gives you an idea of what to expect. Yet, there is one golfer who might just upset Todd’s chances of securing a back-to-back victory. That’s Will Zalatoris.

Can Will Zalatoris Outplay Todd?

Zalatoris is an up-and coming golfer who definitely has the upper hand over the defending champion. Young Zalatoris has had three very good results in 2019, and namely by finishing T3 in LECOM Health Challenge, T9 at BMW Charity Pro-Am and T10 at Robert Trent Jones Golf Trail Championship.

He has posted some pretty decent results as well this year, with 10 Top 10 finishes, and winning TPC Colorado Championship. He also finished T2 at Evans Scholars Invitational and T3 at The King & Bear Classic, all noteworthy accomplishments.

Given that Brandon has a bit of rust in his recent game, it’s safe to assume that Zalatoris will be shooting for a win here, and the odds clearly favor him even though by a sliver.