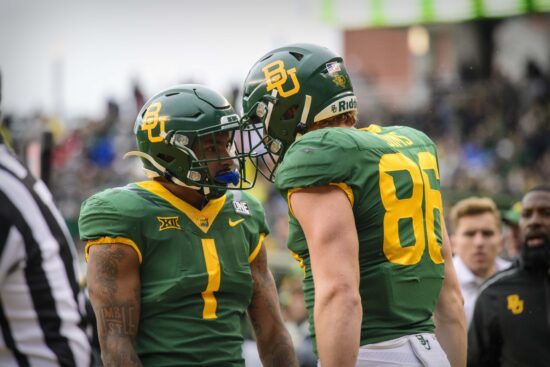 Big 12 rivals will meet when the No. 5 Oklahoma State Cowboys meet the No. 9 Baylor Bears. The Bears are coming into the match as the favorites.

After their very important win, OSU holds the top position over Baylor in the standings. They need to claim this championship to confirm their dominance and continue to keep the playoffs in sight.

The Cowboys are averaging 217.7 passing yards and 191.1 rushing yards per game and have shown great balance in their strategy. They have found recent success in their ground game, which will also be crucial in this matchup.

Oklahoma State has won 11 conference titles since 1926. The 2021 Big 12 Championship Game will be the Cowboys’ first appearance in a postseason conference title game. Each of their previous titles was won without the championship format in place.

The Bears are ready to move forward in their next scheduled game in which they will have a chance to come away with the BIG 12 championship against the Cowboys. Baylor and OSU both have a great defense and have similar strengths in the ground game, which makes the matchup a lot more interesting to watch.

With a winning record of 10-2, the Bears have one of the best running games in all of college football, averaging 227.4 yards per game on the ground. The defense is allowing only 19.4 points per game to their opponents. This time they will be forced to be more versatile or push forward with their usual strategy and break the Cowboys’ will to get the win.

As Competitive As It Gets

These two teams have had a historically competitive series against each other. Oklahoma State has an edge in the last five games with a record of 3-2. These have been very close games due to similar styles that make up both of these teams.

While Baylor has a slight advantage in scoring over OSU, the Cowboys have the better defense. This is a significant factor that the Bears need to overcome to achieve success.

In the QB position, we have a very good matchup between Cowboys QB Spencer Sanders, who has shown some great performances, but also Bears QB Gerry Bohanon has been able to show up for his team when they need him the most.

This is not only an even matchup on the field but also on paper. Both QBs have very similar records and the potential to deliver a great game when they meet on Saturday for all the marbles in the Big 12.

Tensions are rising as the game day continues to draw closer. This matchup will not fall short of being one of the most exciting games this season, with the conference championship on the line.