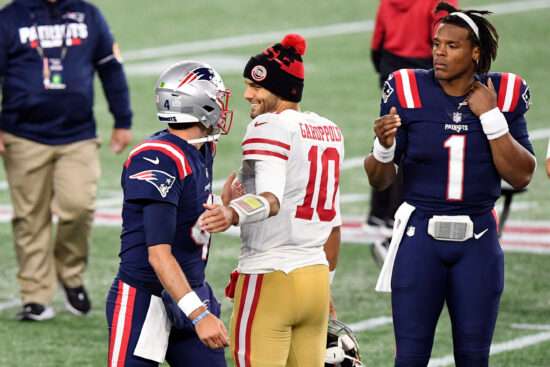 The Draft provides plenty of excitement for the rookies and the fans as they get to dream of a big future, but there will always be a veteran player who will have to worry about being replaced as a result.

The QB position will always be interesting because there’s a natural curiosity about a rookie to see if they might be the next big thing, so any signs of struggle from the starter will result in calls for a change.

We’ve also entered an era where teams can’t take a QB in the 1st round just to sit them for a year (unless you’re Green Bay), so here’s a look at some fascinating QB battles that look set to take place going into next year.

San Francisco have been pretty consistent in saying that Jimmy G was their guy for next season, but we’ll now get to see just how accurate that statement was.

There was a sense that Jimmy G could be traded to the Patriots so those comments were an effort to keep his value high, but they’ve now got Mac Jones and there aren’t any signs of interest from elsewhere.

The problem with starting Garoppolo comes with the price that they gave up to go and get Trey Lance (three 1st rounders and 3rd), so there will be an expectation that Lance gets to play pretty soon.

Jimmy G is also set for free agency next summer so his focus may be on that and ensuring he gets a great deal there, while the 49ers do have a great defense and running game so that would protect Lance if he’s thrown straight in.

It’s likely that Garoppolo is named the starter initially, but that could change very quickly.

There will be mutterings that this is a three-way battle with Jarrett Stidham having his chance to compete too, but it’s really going to come down to Newton and the first-round choice in Mac Jones.

There are a few moving parts here and it currently looks like it’s Cam’s job to lose, but that could completely come down to which version of him turns up.

It’s so easy to forget that he looked fantastic in the opening games of last season until he was struck down with Covid-19, while you also need to factor in that he didn’t have a proper camp to mesh with his new team either.

That will be different this year and he’s already had some time to work with the new receivers, but the main concern will be over his mechanics which deteriorated at an alarming rate last year.

There were reports that the problems were down to injury, but it genuinely looked like he was trying to throw a shot-put at times.

He also had to work with a very limited receiving corps so that didn’t help, but Mac Jones has been touted as the most pro-ready QB from this draft class.

There’s a growing pressure in the league for 1st round QBs to start straight away but we all know Bill Belichick will make up his own mind on that one, yet he’s also a coach who will ignore reputation and simply go with the player he thinks gives the Pats the best chance of success.

Expect Cam Newton to be named the started going into week 1, but he’ll need to play better to keep his place.

Chicago fans may be wondering if there’s even a competition to be had here, as Dalton is largely seen as a safe back-up but not a starter for a play-off contender.

You also have to consider that Chicago gave up a lot to go up and take Fields at number 11, while they also bolstered the o-line so that should help the rookie a bit more.

Ryan Pace and Matt Nagy are running out of time so a transition season isn’t going to cut it, and it does make you think they will go all-out with Fields as the starter to show they’ve started a promising new era for the Bears.

Fields also brings a dual-threat element which can help to open up the playbook and keep the defense on their toes, and that should also help the Chicago D have some time off the field to rest during games too.

The safe option here is to start Dalton until the bye-week and then hand it over to the rookie, but a strong camp from Fields should see him go straight in as the starter on week 1.

This is more of a footnote as we all know that Watson would be the starter under normal circumstances, but legal proceedings are ongoing and nobody really knows what’s going to happen there.

It’s very noticeable that Houston had multiple needs and limited picks in this year’s draft but they still went for the QB with their opening selection, so it does suggest they are gearing up to have a competition between Mills and Tyrod Taylor who was added in free agency.

Taylor probably starts due to his experience, but this is a situation that will be drawn out over the next few months as uncertainty reigns in Texas.