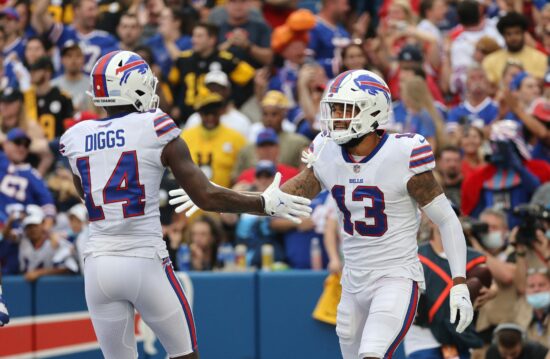 One of the big surprises of the NFL Week 1 slate was the Buffalo Bills falling 23-16 at home to Pittsburgh as -6.5 favorites. Buffalo had gone 7-1 at home in 2020, and that was without the full capacity crowd that was in attendance on Sunday. The Miami Dolphins are still +3.5 home underdogs for this week two matchup, even though Miami outlasted New England 17-16 in week one to take sole possession of 1st place in the AFC East.

Buffalo had the #2 total offense in the league last season and were 3rd in passing yards/game, but Pittsburgh came out with a great game plan in the 2021 season opener. The Bills managed just one TD against the Steelers at the end of the 2nd half, kicking three field goals in the 23-16 loss.

Josh Allen went 30 of 51 last Sunday for 270 yards and a TD, but couldn’t break up a stretch of 20 straight points for the Steelers. Buffalo abandoned their run game fairly early, with Devin Singletary having just 11 carries, but Allen contributing 9 carries for 44 yards helps pad the stats in the ground game. Stephon Diggs caught just nine balls, but never really got loose, tallying just 69 yards.

Despite the loss, last Sunday did mark a solid showing from the Bills’ defense. One of Pittsburgh’s scores came on a 9-yard blocked punt return, and Buffalo limited Steelers rookie Najee Harris to just 45 yards on 16 rushes. Ben Roethlisberger also had just 188 yards passing for Pittsburgh, which makes you wonder how they were able to pull off the big road win.

It wasn’t always pretty, but the Dolphins will gladly take the week one victory as the only team in the AFC East to notch a win in their series opener. Tua Tagovailoa won the matchup of former Alabama quarterbacks, throwing for 202 yards and a TD and adding another 3-yard TD run to bet Mac Jones and the Patriots.

The numbers aren’t awe-inspiring for the Dolphins coming out of week one as they ran the ball 23 times for just 74 yards and had a net 185 yards passing. The rookie Jones, playing in his first NFL game, was able to connect on 29 of 39 passing attempts, while New England’s Damien Harris also had a 100-yard rushing game.

One thing is for certain – the Dolphins should scrap whatever defensive game plan they had against the Bills in 2020 because it didn’t work. Buffalo picked up a 31-28 win in Miami in week two of last season behind 415 yards and 4 TDs from Allen, and then won 56-26 in the season finale behind another 3 TD passes from the Bills’ MVP candidate.

Who will the Bills vs Dolphins game:

The week one loss was a wake-up call for the Bills, who many people have as a favorite to represent the AFC in this year’s Super Bowl. Miami was very lucky to escape the New England game with a win and had absolutely no answer for Allen in two games against Buffalo last season.