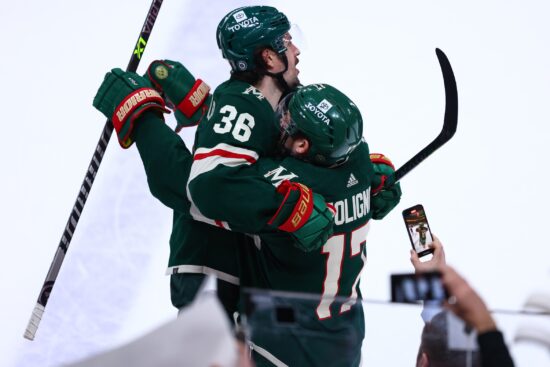 On Saturday afternoon, the Minnesota Wild (35-4-20) will welcome the Chicago Blackhawks (22-9-30) at Xcel Energy Center in Saint Paul. That’s where each of the previous Blackhawks at Wild games went to overtime. This includes both games these two played in the 2021-22 NHL season.

Minnesota won both of those matchups and Vegas odds suggest that this team is going to do it again. They sure have the motivation to do so, as another win would bring the Wild closer to achieving their goal of booking the playoff ticket.

So far in the 2021-22 season, we saw three Blackhawks vs Wild duels, each of which was won by the team from Minnesota. No surprise there as the Wild were the favorites in each of those. What is surprising is that Minnesota’s score differential in those three games was 14-4.

Sure, Chicago isn’t great in the defense (210 goals conceded in 61 games) but these guys seem to do even worse when playing against Minnesota. For instance, in their most recent duel, the Blackhawks lost 5-0 at home.

On the bright side, they’ve been alright in the offense when playing against this opponent. Excluding their most recent game, in which the Blackhawks failed to score, we saw them put away over 3 goals per game on average since 2017.

With 74 points collected over 59 games, the Wild are sitting in the #3 position in the Central Division. AS things currently stand, it’s very likely Minnesota will make the playoffs this season. Sure, there’s plenty of time left for things to change, but if this team continues playing as usual, they’ve got nothing to worry about in their future.

The Wild are in a pretty decent run, with seven points won in the past five games. They did lose two games during that period, one after penalties and one in regulation. The game they lost in regular time was against their divisional rivals, the Nashville Predators.

It was a slip, but the Wild probably don’t worry much. After all, they’ve managed to bounce back straight away by beating the Boston Bruins on Wednesday evening.

After the game with Chicago, Minnesota’s schedule will get uglier, with a few major challenges coming their way by the end of the month – Vegas Golden Knights, Vancouver Canucks, Colorado Avalanche, etc.

That said, this team probably wants to play it safe and win two points against weaker opponents such as the Blackhawks. The Wild will take Saturday’s game seriously and get themselves a win in the regulation.