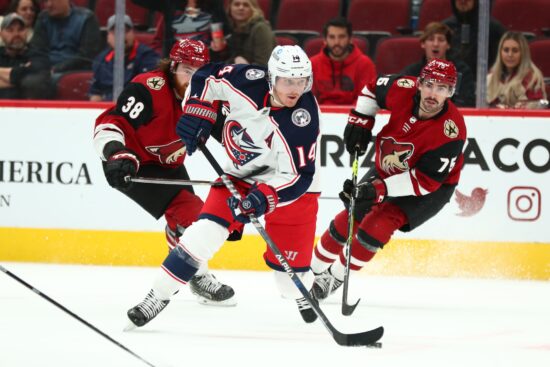 The featured game in the NHL on Saturday takes place in Las Vegas, as the Golden Knights look to find their momentum with a second straight win against the in-form Columbus Blue Jackets.

It has been far from the ideal start to the season for the Vegas Golden Knights, but they remain within the leading to contenders to win the Stanley Cup betting markets this season. There have been glimpses of their best form in their last ten games, as they have picked up seven wins during this run, suffering just three defeats. They have won ten games from 17 this season, and are yet to lose in overtime, which is a trait that they will be hoping can steer them through to the latter stages of the Stanley Cup come the end of the season.

The Golden Knights bounced back from defeat against the Carolina Hurricanes in their last NHL fixture, as they overcame the Detroit Red Wings on Thursday evening. Zach Whitecloud scored twice in that 5-2 success, while four of the Golden Knights goals came in the second period of that fixture. Paul Cotter, Nicolas Hague, and Reilly Smith scored the other goals in the win.

It won’t be an easy feat for the Golden Knights this weekend though, as they come up against a Blue Jackets team that are in hot form. Columbus have won their last two games in the NHL, and sit fifth in the Metropolitan Division. There are still areas for concern for management though, as they have allowed 44 goals to this point, and have scored just 48. However, six wins from their last ten games has been a fine turnaround in form for the Blue Jackets.

The Blue Jackets also picked up a win on Thursday evening, as they overcame the Arizona Coyotes in a shootout. It was a pulsating match-up in the NHL, with both sides trading shots throughout. Eventually, the game ended in a 4-4 draw after regulation time before the Blue Jackets won 3-2 in the shootout. Boone Jenner scored twice in the win, while Justin Danforth and Zach Werenski also found the net in the success for the Blue Jackets.

Recent fixtures between these franchises have been dominated by the Blue Jackets. They have picked up wins in four of the six NHL meetings between the two, which includes their 3-0 success in the last meeting in January 2020. The last win for the Golden Knights came in November 2019.

The Blue Jackets have a fine recent record against the Golden Knights, but we foresee the hosts making home advantage count and winning their second game on the bounce this weekend.