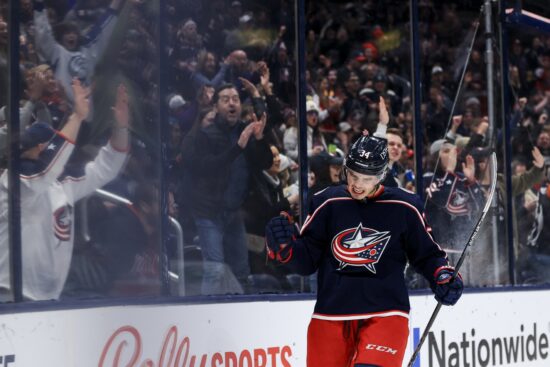 The Columbus Blue Jackets (30-3-27) still have a chance to get to the top 4 in the Metropolitan Division. They are 11 points behind the Washington Capitals, the team sitting in the closest playoff spot. The season is long, meaning that the Jackets have a chance to overtake the #4 position, especially if they keep on playing well.

They’re coming off back-to-back wins and are favored to win a third on Wednesday evening. The team they’re playing against is the Ottawa Senators, who are sitting one spot above the bottom of the Atlantic Division with a 21-5-33 record.

Their most recent game saw them beat the Vegas Golden Knights 6-4 in a game in which the Blue Jackets were +200 underdogs. They did great in the offense, with teenager Cole Sillinger scoring three goals. Still, the man of the match was Oliver Bjorkstrand who scored once and made three assists.

They did well in the offense, but their defense hasn’t been great. In fact, the Blue Jackets conceded 5 or more goals in four of their previous five NHL games.

The Ottawa Senators are seventh in the Atlantic Division with 30 points fewer than the Boston Bruins, the closest team from the playoff zone. That said, their chance of qualifying for the postseason is extremely slim.

This goes especially because their recent form is very poor. The Senators lost their previous two games, despite not playing against too tough opponents. First, they lost 5-3 to the Arizona Coyotes, a team that’s at the bottom of the Central Division. Then, last Saturday, they lost 6-3 to the Chicago Blackhawks, who are just one spot above the Coyotes.

Not only is Columbus a much better team than Ottawa, but the Blue Jackets also have motivation on their side. They need to win such easy games as the Wednesday one in order to keep their playoff dreams alive.