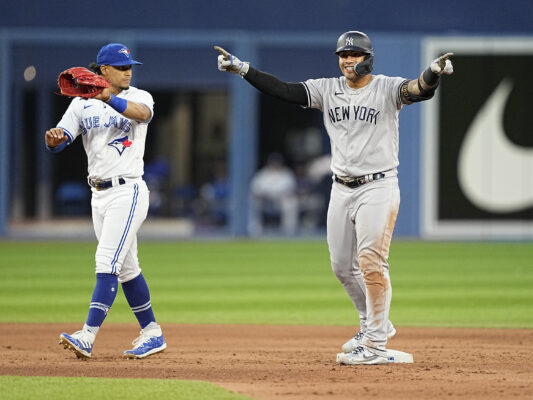 Toronto has now lost 4 of their last 5 games. They’ve been outscored 26-5 in their last three games and are in need of a major momentum shift.

New York improved to 15-1 in the month of June with their victory over Toronto. They’ll face two more projected playoff teams in the Rays and Astros next week.

The Blue Jays currently own the American League’s top Wild Card spot and sit in second place in the league’s toughest division, the AL East. Despite this, they’ve found themselves 12 games out of first place in the division and holding on to their Wild Card spot by just two games. Now sitting at 37-28, Toronto has struggled all over the place in the past few games. They’ll need a complete turnaround to avoid being swept by their rival Yankees at home.

After being outscored 26-5 in their last three games, the Blue Jays will look for starting pitcher Yusei Kikuchi (2-3, 4.80 ERA) to turn things around. Kikuchi faced the Yankees twice last month, giving up just 3 runs in 11.1 IP, equivalent to a 2.38 ERA. Toronto also needs a major bounce-back on offense. In their last win, infielder Vladimir Guerrero Jr. led the way, going 4 of 5 with a walk-off double. In the 3 losses since then, Guerrero Jr. has gone 1 for 11 at the plate (.091). The Blue Jays need their signature slugger to get back on track before they slide any further in the standings.

The Yankees just keep winning. They’ve now won 17 of their last 18 games and have gone 42-10 since the first couple weeks of the season. New York is currently on pace to win 122 games. The current all-time Major League Baseball record is 116 wins. The Yankees’ dominance has come from all across the board. Their pitching staff recorded their 11th shutout of the season on Saturday, on pace for a franchise record. The starting rotation has the best ERA in baseball, and the bullpen ranks 2nd.

On offense, the Yankees are led by outfielder Aaron Judge, who leads all of Major League Baseball with a 1.038 OPS. Judge has actually slowed down a bit as of late. He’s 3 for 19 (.158) at the plate in his last 5 games. Despite that, the Yankees won all five games, furthering the inclination that they are loaded across the board. Picking up the slack during Judge’s struggles have been infielders Anthony Rizzo and Gleyber Torres, who are hitting .381 and .368 respectively in the past week.

Road sweeps are usually pretty uncommon, but I’d be foolish to pick against the Yankees right now. They have their ace Gerrit Cole (6-1, 3.33 ERA) on the mound, who ironically has the worst ERA in the rotation. Cole has been up and down as of late, and Kikuchi has had success against the Yankees in the past, so I wouldn’t completely count Toronto out. I think the Yankees get the sweep, but in a more competitive game than the first two of the series.